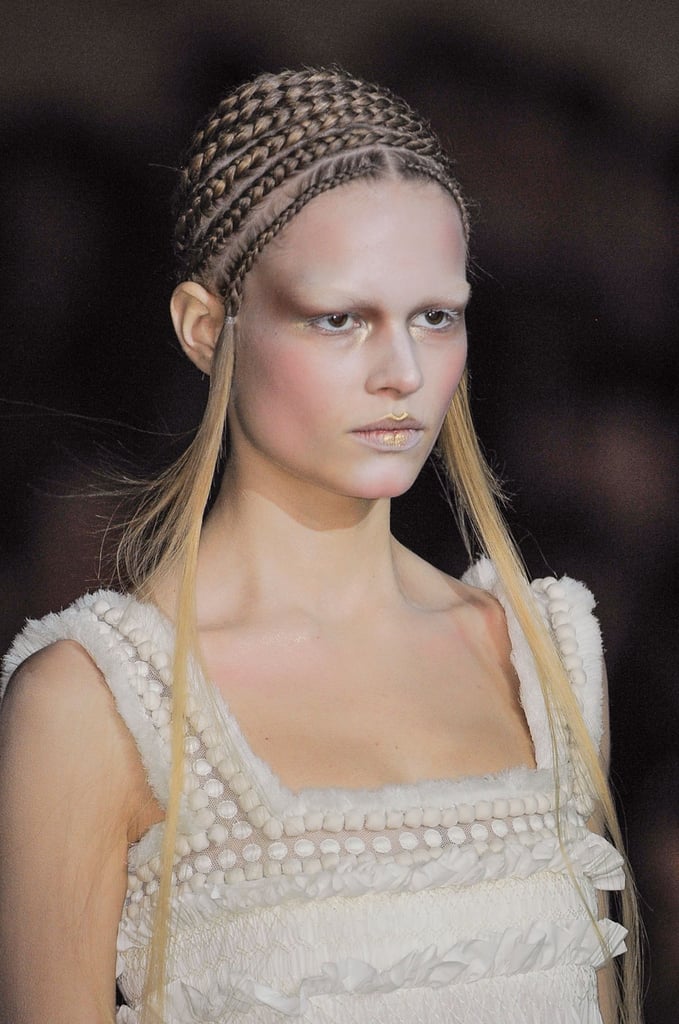 Modeling for Alexander McQueen this season was quite an undertaking and required hours of backstage preparation to create the dramatic look. The show was inspired by nature with a catwalk that resembled a dark, mossy woodland, and the beauty look took a cue from this.

Models sported an intricate braided hairstyle that coiled around the head in a spiral pattern, resembling the cornrow base used when fitting a weave but with thin strands of long hair dangling free at the front. Pat McGrath's makeup look focused on giving the models an owl-like beauty, with contoured faces made to look pale and ethereal with shades of white and silver with heavily flushed cheeks and sunken eyes.

Eyebrows were bleached, with apricot-bronze shadow used below the eyes and above the crease, winging up at the sides, with a flash of gold in the inner corner. Silver shadow and pale mascara were the focus on the lids and lashes when they were visible, though some models sported huge owl-inspired lash extensions made from inky black feathers that reached above and beyond the brows. The look was finished with pale, washed-out lips with just a hint of metallic.

Fashion INterview
What It Means to Have Style Right Now: 46 Designers, Models, Influencers, and Stylists Weigh In on Fashion's Big Question
by Hannah Weil McKinley 6 days ago

The Royals
Princess Diana's Iconic Black Sheep Sweater Is Being Re-Released, and It's Adorable
by Nikita Charuza 1 week ago

Celebrity Style
Beanie Feldstein Channelled Blair Waldorf in Miu Miu, and of Course a Headband Was Involved
by Kelsey Garcia 1 week ago