If you used to play with Barbie as a child, you know that the doll's face has majorly evolved since your days on the playground. But you may be shocked to see just how much Barbie's beauty has changed over the span of her 56-year career. Tumblr user tenaflyviper took images of the iconic toy from each year it's been on the market and turned them into a chart, and the resulting graphic is truly impressive.

Once you get over the initial shock of Barbie's blue eye shadow (and that neon green shade in 1979!), look at how different today's doll is from the first model. While she is far from being a realistic standard of beauty for most women (though there are other toys for that!), Barbie has come such a long way. Mattel has made the doll more diverse, and instead of just a Caucasian blonde, she's now Asian, black, and Latina, too. And Barbie's extreme makeup looks and highly coiffed hairstyles have been replaced by flattering full brows, fluttery lashes, and a soft pink lip.

While we do wonder how Barbie will change next (rainbow hair? contouring sets?), we love how she never fails to spark our imagination. 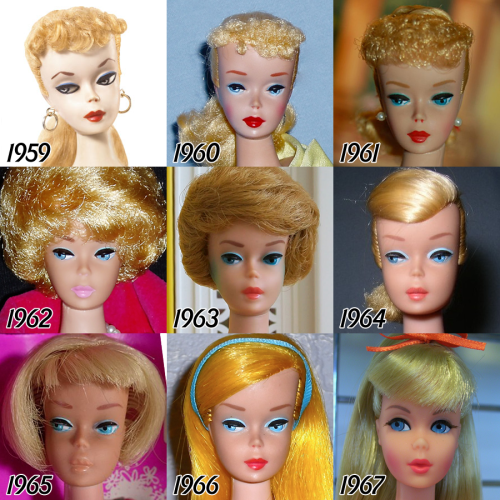