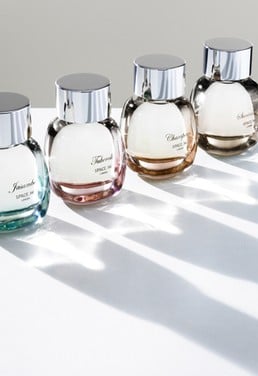 The mecca of all self-proclaimed beauty junkies – Space NK – is looking to up the ante this autumn. They have just unveiled plans to launch five fragrances.

According to WWD, the brand will be relaunching their existing Laughter scent, as well as treating us to four new fragrances, called Champaca, Jasamber, Tuberoli and Santalrosa, which were inspired by the travels of the firm’s founder, Nicky Kinnaird.

Laughter, Space NK's unisex perfume, is being relaunched to celebrate the chain's fifteenth anniversary, this October. It was originally introduced in 1999, six years after the company opened it's first branch, in Covent Garden.

“Laughter has been synonymous with Space NK as a brand,” Kinnaird tells WWD of the scent, which was inspired by her childhood spent in Spain, “It’s our iconic, signature fragrance.”

The five scents for fall are part of the brand's new focus on “clean” products, according to Kinnaird. By this she means free of parabens, sulfates, petrolatum, glycols, mineral oil, silicones, synthetic colors and other chemical compounds.

“We have had other private label scents,” says Kinnaird, “but now the focus is on clean products — particularly with the clean formulations. That’s where we want to go as a company.”

The range will also include body lotions, hand creams, scented candles and bath oil, as well as gift sets in time for Christmas.