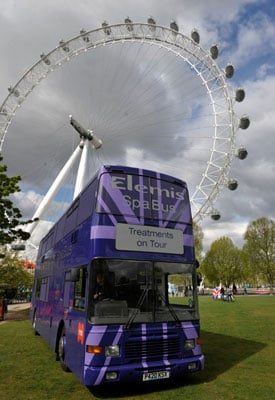 All aboard the Elemis SpaBus! Elemis is celebrating its 20-year anniversary this month by launching its first ever roaming treatment bus in aid of charity Mothers4Children.

The Elemis Spabus comes complete with treatment rooms on both decks and offers everything from 15-minute facials to body spa therapies and Shiatsu chair massages.

Treatments start at £10 and the aim is to raise over £50,000 for the cause! (£1 from every treatment and skincare kit sold will go to the charity.)

The tour began last week in London, and next will stop at the Wireless Festival, Polo In The Park, Marylebone Summer Fayre, The Clothes Show Live in Birmingham and the Cartier Polo.

What a fantastic idea! I'm already a big fan of Elemis' spa treatments so this is even more of an excuse to get on board! (No pun intended.)

Mothers4Children is a groundbreaking charity with a legion of famous supporters from Naomi Campbell to Sarah Brown and Yasmin le Bon and does fantastic work for causes all over the world. I'm sure the new collaboration will go down a treat.

Are you a supporter of Mothers4Children?