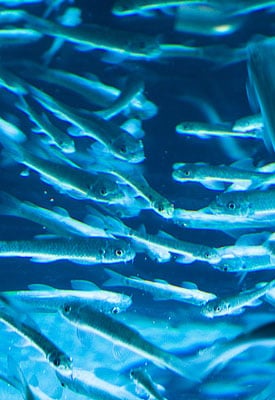 As beauty fads go, it's certainly one for the open minded! Beauty blogosphere is abuzz in London at the moment over the latest addition to Kensington spa Aqua Sheko, which offers pedicures by fish!

Yes, you read correctly. The idea is that feet are submerged in special water tanks filled with Garra Rufa fish, who nibble gently on feet, removing dead skin softened by the warm water.

Gara Rufa fish are apparently widely known for their nibbling benefits and have been used in spas in Turkey and the Far East for years now. In other countries they can also sometimes be known as 'doctor fish'.

Aqua Sheko's pedicure lasts 30 minutes followed by 15 minutes of reflexology. It sounds a bit 'out-there', but apparently the treatment has been endorsed by the British Association of Dermatologists.

It sounds like fun! I haven't tried it yet but plan to check out the Spa this week (more on this later). For the month of June the treatment is £30, and from July onwards will be priced at £45, so it's not an outrageous price to have a go. Would you like fish to nibble on your feet?

Check out my gallery of fishy images below.