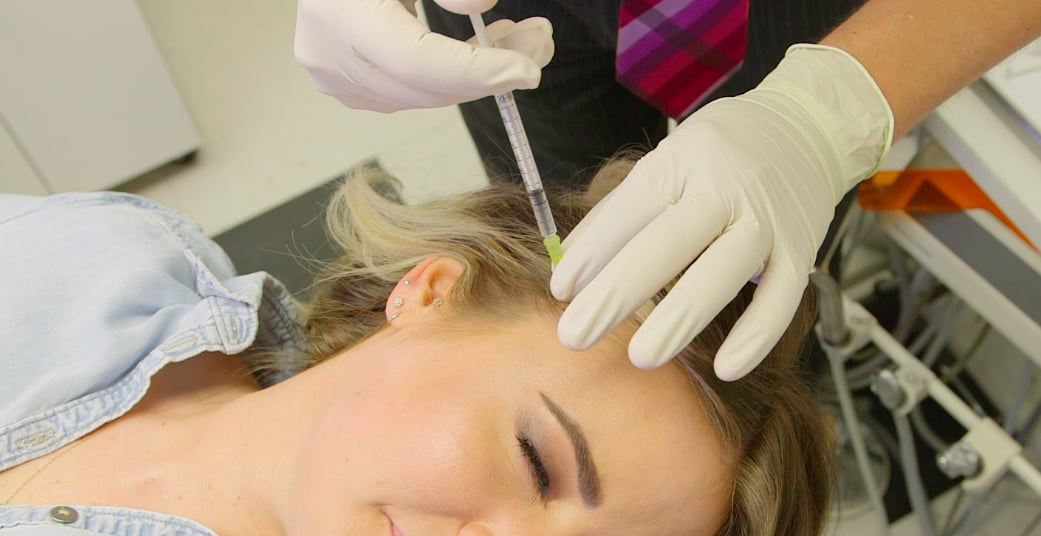 Botox as it stands today is a lot like apple cider vinegar: people are finding new and improved ways to use it. We know that the injectable targets fine lines and crow's feet, but we've also learned it can be utilized for issues like grinding your teeth and overperspiring. Now, there's a new treatment cosmetic dermatologists are touting as "Blowtox," and it's all about scalp sweat.

It's pretty simple: Blowtox is Botox administered on the scalp to reduce sweating. It's not a new treatment — dermatologists have been administering it to the scalp for several years now, but it's resurging thanks to Instagram.

"Botox has long been FDA-approved to treat sweating in the underarm area, and the same technique can be used to reduce sweating anywhere on the body. For example, under the breasts, in the groin, on the face, scalp, etc.," said Dr. Nancy Samolitis, cofounder of Facile Dermatology + Boutiques in Los Angeles. (In the groin? Grotox, anyone?)

Nobody needs an explanation as to why you might not want your head to be sweaty, but alas, "Blowtox" refers to extending the life of a professional blowout for people who enjoy exercising. If you avoid doing your hair because you know you'll sweat it into a gross, stringy mess while working on your fitness, Blowtox could be worth looking into. Samolitis says it's also safe.

"Botox is safe to use in any patient who is [considered] a good candidate and doesn't have certain chronic neurological conditions," she said. "Injecting the scalp, specifically, doesn't incur any additional risks. In fact, some of the injection points are similar to those used to treat migraines."

When it comes to units, Samolitis says she begins with 100 units, although it varies per client. (To compare, she said up to 200 units are used in other areas of the body for sweating.) You can expect it to take a week to kick in, and it can reduce scalp sweat by 80 percent. It lasts four to six months, but again, it depends on your lifestyle and how active you are.

One common question when it comes to using Botox for perspiring focuses on compensation sweating: if you take away your ability to sweat in one area, will your sweat glands work overtime in another? Samolitis reassured us this is not the case. "The phenomenon of compensatory sweating usually occurs after the surgical procedure that used to be more common for treating chronic sweating. It is not typically reported after treatment with Botox," she said.