I was not prepared for the idea that would pop into my brain on Saturday evening of Halloweekend. I was leaving an overcrowded Disneyland with my partner, and during the 45-minute drive back to Los Angeles, "Paradise City" by Guns N' Roses came on. We both sang in our best Axl Rose impressions, and that's when it hit me: the costume I'd throw together for the party I was attending that evening would be none other than Bret Michaels.

I know what you're thinking — Bret Michaels was not in Guns N' Roses, and honestly, who do you think you are comparing the two? Every rose has its thorn, and mine I suppose is seeing all hair bands the same. (Go ahead and @ me, I deserve it.) The point of this post, however, is not to drag me for associating Bret with GNR, it's to tell you how ridiculously it easy it is to put together a Bret Michaels costume.

First and foremost, Bret Michaels in the '80s was too glam to give a damn. If I wasn't an infant during that decade, I'd have surely wanted to look like him. He is a stunner present day. He has lips I could only dream of having; his piercing blue eyes are accentuated by a smoky liner. This is a gorgeous human being. He's always tan, which is right up my alley as a spray tan fiend. Arriving back home, I set up shop in my bathroom and got rolling. Turns out I had everything I needed to transform into the Rock of Love star, which thrilled me — if you love makeup, you're all set.

First things first: bronze up, baby. You should look like you've either bathed in self-tanner or spend most of your days drinking on the beach. Michaels is known for being tan (and shirtless, but you don't have to go that far). For the eyes, all I did was remove the eye shadow I had on with a Q-tip and then applied a heavy dose of black eyeliner — Urban Decay 24/7 Glide-On Eye Pencil in Zero was my poison (I've got jokes!) — to my upper and lower waterline, smudging it out. Great news: this look is hella smoky, so don't be afraid to go overboard.

Like I mentioned, Michaels has great lips; I genuinely cannot tell if he's had a little help or if he was born this way, but it's not important. Charlotte Tilbury Lip Cheat in Pillow Talk, a rosy pink lip pencil, gave my lip line a flushed look while creating the illusion that my lips were poutier. For the facial hair, Fenty Flyliner has never failed me and in this case was the pièce de résistance. I took it in downward strokes, alternating the pressure each time, to create a goatee.

For the hair, take some creative liberties here. Mine is long and blond, which really made things simple. If you have a long blond wig, throw it on — or don't. Just sporting a red bandana regardless of your hair type or colour will do the trick. Bonus points if you wear a cowboy hat on top. My ear piercings were a nice touch.

This took me all of 15 minutes to pull together, with the exception of the Poison tattoo I drew on my arm. I should also add I have never been more comfortable in a costume before — is it because I wore black jeans with a black t-shirt and leather jacket? Or that the truest form of myself is actually the lead singer in a hair band? One can't be sure, but I felt like a sexy blond Jack Sparrow, sans the 18 overcoats. I felt it was important and, frankly, necessary to share this costume with you all, as it was a huge hit at the party and one of the easiest looks I've ever created in my life. 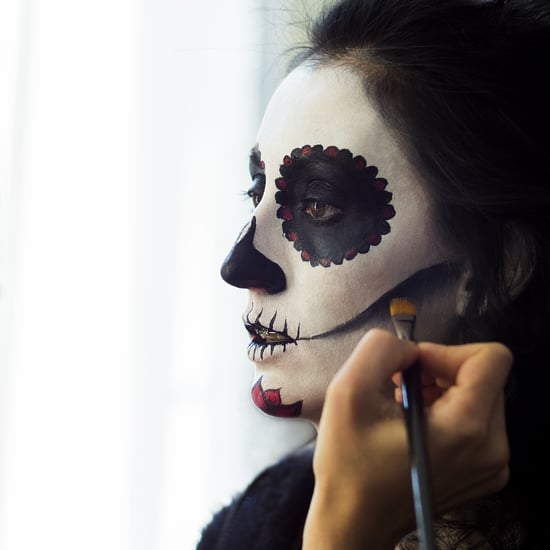 Halloween Costumes 2020
Is Day of the Dead Skull Makeup on Halloween Offensive? It Depends
by Kelsey Castañon 08/10/20

Tiny Tattoos
From Crystals to Tarot Cards, These Witch Tattoos Will Put a Spell on You
by Jessica Harrington 20/9/20