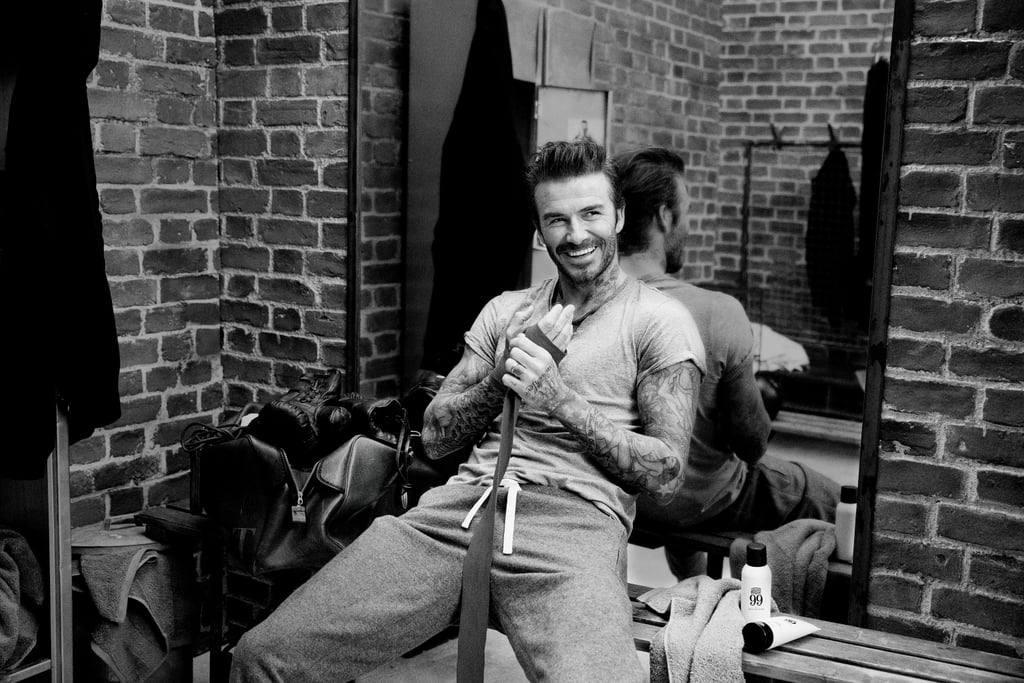 David Beckham is following his well-manicured wife's footsteps and launching a new men's grooming line with L'Oréal Luxe. (In case you forgot, Victoria Beckham has a successful makeup line with Estée Lauder). And according to a rep from the brand, David was just as involved as Victoria was with her offering or, say, Rihanna was with Fenty Beauty. This is the real deal! Yes, when you buy that lotion, David probably put the same one on his body. Have fun with that mental image.

POPSUGAR has an exclusive first look at everything before it launches in March. Here's what we know so far. The men's grooming brand is called House 99 by David Beckham. House refers to the football star's goal of building an inclusive community of "grooming aficionados," according to the press release. David will share his personal styling tips and recommendations with those who are part of his "house," aka his tribe. The number 99 also has great significance to Mr. Beckham. In 1999, he married Victoria (when she was Posh Spice!), his son Brooklyn was born, and his Manchester United team won the treble (translation: the team won three trophies in a season).

There will be 13 products, all launching Feb 1. in the UK at Harvey Nichols. And like we said, he was truly hands-on with everything, from the formula to the name and the packaging. The choices behind the branding were inspired by British barbershop culture and David's own dapper style. Through the years, David has challenged what it traditionally meant to be "masculine" by experimenting with his style, be it slicked-back hair, a scruffy beard, or sexy tattoos. And in 2018, he's saying YES, of course it's OK for men to use hairspray and be bloody proud of it. (House 99 has a chic-as-hell hairspray for men!)

"I'm so excited to finally share House 99 with everyone around the world!" David said in a press release. "For me, grooming is not only about how you look, but how you feel. It's about being comfortable, trying new things, and shaping your next look. I created House 99 to give people the inspiration as well as the right products to experiment and feel completely at home doing so. House 99 is here to support men, to give them the tools they need to create whatever look they are going for. Welcome to the house."

Expect products to deal with diverse needs, from shaving cream to beard oil and hair pomade, all sold in sleek black-and-white packaging. The formulas contain holistic ingredients, including quinoa and spirulina. While these may sound like things you eat after the gym, both contain health-boosting beauty properties, as they are natural protein-rich actives. Basically, they help give you strong hair and beards and revitalised skin.

David told POPSUGAR his favourite product right now is the Seriously Groomed Beard and Hair Balm. This light and creamy balm is the ideal two-in-one for busy men since it nourishes unruly hair and soothes beards of any length. Since 2015, David has been rocking a full beard (HOT!), so this was a necessity for his life.

Keep reading to see seven of the products before they launch and a video featuring David!

Coronavirus
Nail Salons Are Set to Reopen on 12 April 2021, According to Government's New Roadmap
by Tori Crowther 6 days ago