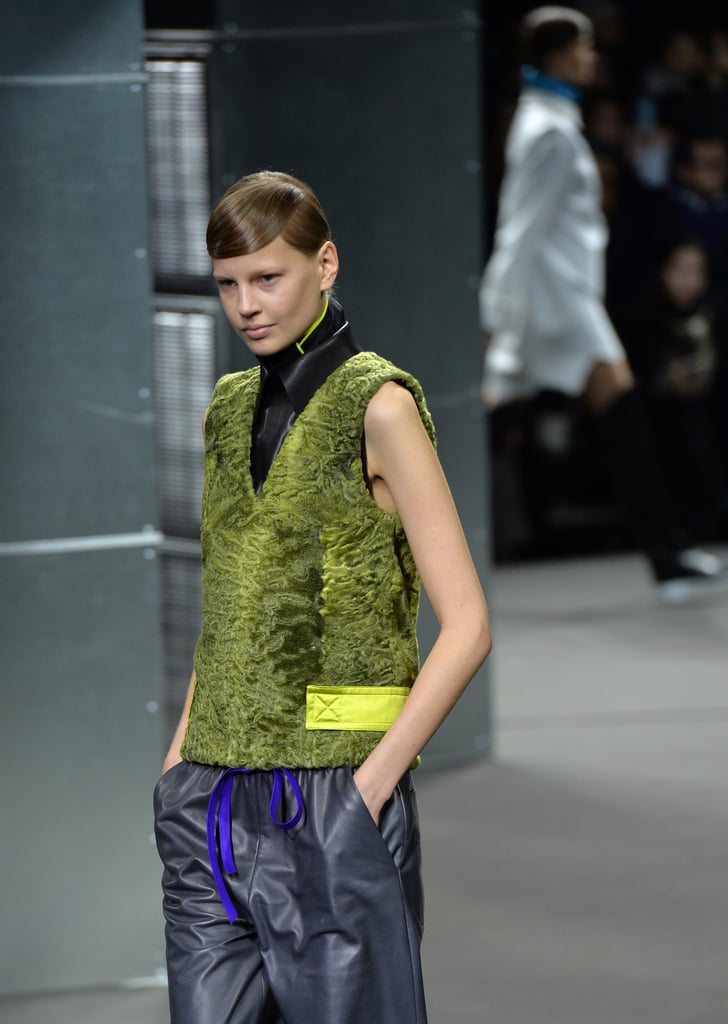 You have to be committed to be an Alexander Wang model. Perhaps that’s why the major names in the biz (Gisele Bünchen, the Victoria’s Secret Angel crew, etc.) have joined his show roster. This season, Wang’s models had to really want it to (A) venture to Duggal Greenhouse in far-out Brooklyn where his Autumn 2014 show was being held and (B) arrive at 4 p.m. — four hours before the doors opened — to have their brows bleached. At least that’s what Diane Kendal on behalf of Nars told us backstage before his Fashion Week presentation. She explained that, postshow, the models would all have to have their brows dyed back to their original colours.

"Alex likes his girls to be quite boyish and very strong," said Kendal. "There is a futuristic element, so that’s how we came to decide on bleached eyebrows." Models wore white-blond eyebrows with a contoured face.

When asked if Miley Cyrus — who recently bleached her brows — influenced it, Kendal responded, "No." And if Miley has done it, and Wang's fierce models have tried it, should you be next to take on the white eyebrow trend? Again, Kendal replied with a definitive decline. "It’s taking away the eyebrows, so it's hard to carry off unless you have something else to balance it, like really strong hair," she explained. "I have done the contouring, which helps. But it doesn’t really translate into everyday wear."

The hair was equally severe with a sleek, deep side part pulled into a low ponytail, which was tucked under the clothing. “It was taken from an illustration Alex had done, like a fashion drawing," offered Guido Palau for Redken. "So we wanted hair that looked very drawn-on. It feels a little bit boyish and a little bit '60s — like how the men swept their hair over." He used just two products to create the look: Redken Control Addict 28 High-Control Hairspray was spritzed onto hair after it was parted, and Redken Shine Flash 02 Glistening Mist (£13) gave locks a shiny finish. "There's a masculine utilitarianism. They look like little soldiers, in a way, when you see them together," Palau added.

Nails were coated with a concoction of Essie nail polishes that lead manicurist Michelle Saunders called "Tomboy Beige." The layering began with one coat of Sand Tropez (£8), a beige-cement colour, followed by a coat of Mademoiselle (£8), a sheer pink. The look was pulled together with what Saunders described as a "dramatic base coat": Mad About You. "It looks a bit industrial, which is inspired by the space we're having it in," she noted. We're calling Wang's futuristic show a "Space Jam."