As I finish the climb to Georgia "Toff" Toffolo's gorgeous apartment, she profusely apologised for the winding staircase as she sorted out her recycling, simultaneously exclaiming that I was wearing a top that she also has (thank you, trusty Zara). I could just as easily have been in my friend's flat as the queen of the Jungle's South West London apartment, and it became immediately obvious how the Made in Chelsea star quickly won over the hearts of the nation. She's the girl next door with an infectious smile and an honest eagerness to help others, and she's also a woman who's evidently wise beyond her years.

On Becoming an Ambassador For Dermalogica:

After it was announced that Made In Chelsea and TV star Toff was going to be the new ambassador for Dermalogica's clear start range, I immediately wanted to get my hands on it for a few reasons. It was the first skincare I ever used as a teenager and I still truly trust it, I've had an awful breakout recently and the new Breakout Booster (£19) came to my rescue. I was intrigued about Toff's own skincare journey and why she chose to partner with the brand. It turns out Dermalogica's Clear Start range was the first skin care Toff was introduced to as well. She explained, "I think it's important to only work with brands you genuinely use and love. My skin has been such a problem for so long, and I've been so open with fans and on TV; I just thought 'actually I need to be authentic', and this was the only one really. It's the only [products] that have worked".


"Television is my thing, but television gives me my voice to educate."

On Being a Role Model:

Since becoming queen of the I'm a Celebrity. . . Get Me Out of Here jungle, Toff has not only amassed a young following, she's won over the entire nation, and in my opinion, it's all down to her genuine and positive nature. She told me that "television is my thing, but television gives me my voice to educate, which is such a privilege, and it's something that I don't take lightly", explaining that she experiences this first-hand with Instagram messages at all hours of the day, recalling one sweet fan who had messaged for skincare advice on behalf of her brother. When I asked why she thinks people feel so open to come to her, she replied, "I think because I've been so raw about it, people really relate to it. I want to inform, and I want to learn more, every day I want to learn more". Although, Toff admitted that the term "role model" makes her "feel quite embarrassed" because it's "quite a weight on someone's shoulders" but it's a responsibility she takes seriously.

On Her Journey With Acne:

Confidence and positivity aside, this wasn't an easy road for Toff. Admitting that she turned to some very high-coverage products in the past: "At my baddest times, you know Estée Lauder double wear [foundation]? There is a camouflage version, so you can imagine what that is like — makeup artists use it to cover tattoos." It wasn't long into our chat before Toff described how her skin made her feel. At the beginning of filming Made In Chelsea, she used to cry as the close-up cameras made her so self-conscious. She said, "now it makes me shudder thinking about that. I don't know how I got through those years. I don't think you ever forget that". She continued, "It makes me want to cry when I think about how bad it was . . . if you told me I'd be sitting here a year later looking like this, I would have said you were lying, there's no way".


"I want people to see me and not a painted version of me."

On Dealing With Acne in the Jungle:

When Toff entered the I'm a Celebrity. . . Get Me Out of Here jungle, the topic of her acne was front and centre. "It really upset me actually because ITV said they had to release an official statement because I had foundation in there, which is fine; however, I believe if you struggle with your skin, it's a medical condition and should be treated as such". Although it was an upsetting thing for Toff to go through in the jungle, there's no denying it made people stop and think about the way we use makeup. Obviously, she would have rather not bared all on TV with such an insecurity at the time, admitting "it made me feel terrible"; she acknowledges now that it had a positive impact on others. She said, "I'm really glad because I want people talking about skin and helping them; it's not just about acne and about what you use, it's about young people struggling, adults struggling and women, everyone". Toff admitted that actually, without the foundation in the jungle, she wouldn't have been herself. "I've been on a bit of a journey with my skin, and I feel like in the past year, I've bared everything to the nation, and I haven't really got anything to hide". I said that she really has won over the nation, to which she replied, "I'm so lucky. I don't know what I did in there".


"I've bared everything to the nation, and I haven't really got anything to hide."

On Products She Swears By:

So what helps her feel confident now? Of course, her current number one product is Dermalogica's Breakout Booster (£19). I've personally been using this for three weeks and haven't had a breakout since: this stuff really works. Toff's slight frantic nature was met with excitement when I asked her favourite products. She said, "I suffer terribly with dry lips, it's got to be eight-hour cream. Actually do you know what? I'm going to change it, because that is not the truth. This other stuff [she springs to another room to find it]? Eucerin Aquaphor (£9). I get embarrassed about telling people. It is actually on a par with eight-hour cream but less than a third of the price". She puts this everywhere: nails, lips, elbows, you name it. And finally, she's a fan of Hourglass Vanish Flash Highlighting Stick (£38), because who doesn't like a luxurious glow? Another thing that boosts her confidence now is her freckles: "I remember when I was younger, my freckles were so annoying, and now when I get my makeup done, I'm like, 'can you leave this bit' because I like them".

On How She Stays Grateful:

One thing is for sure: Toff doesn't take anything for granted. She even shared the supersweet way she stays grateful: "My friends and I started about two months ago, everyday on our Whatsapp group, one thing that we're grateful for. We remind each other, one out of three will remember, then you feel guilty, like 'f*ck what am I grateful for?' And then you read back over them, and it makes you feel so good. I was moaning about something, and my friend was like, 'you've got so much to be grateful for' and I was like 'shit, I really have, I am so lucky', so from now on, and we kept it up". The interview ended with Toff saying she feels bad that she didn't have tea and cake prepared, which I think says everything you need to know about her personality and appeal. This is one star who's staying grounded — and grateful — despite her fame. 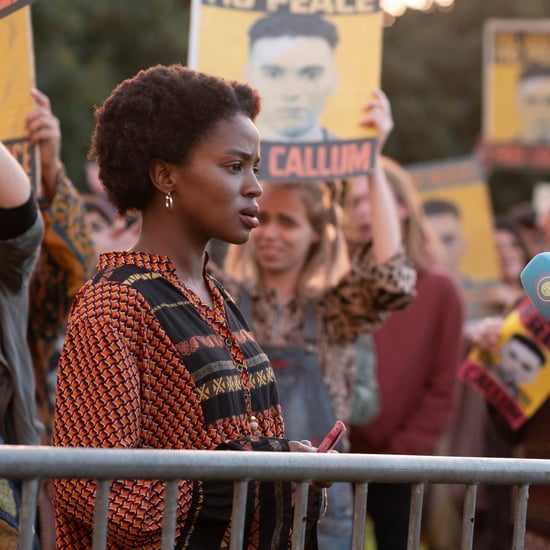