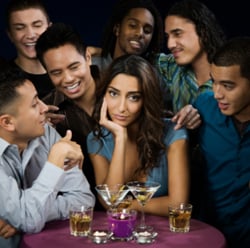 I would never dare to suggest that we only make ourselves look beautiful to attract the attention of men, but let's face it, it's always nice to be noticed for the right reasons. While red lips and long blonde hair are often easily dismissed as male-magnet cliches; in terms of evolution we are genetically programmed to find certain traits attractive. A symmetrical face, for example, is well known to signal healthiness while a recent survey showed that men find women with 'typically feminine' faces more attractive.

While I'm a great believer in celebrating your own individual beauty and also experimenting with different looks for fun, not to hook a man, it's intriguing to know which beauty tools you can use in your armour to be utterly irresistable to the opposite sex. Just read more for the scientific approach to seductive beauty:

Confidence
5 Beauty Tips For Feeling Sexy Naked in Seconds, According to Celebrity Pros
by Jessica Harrington 01/7