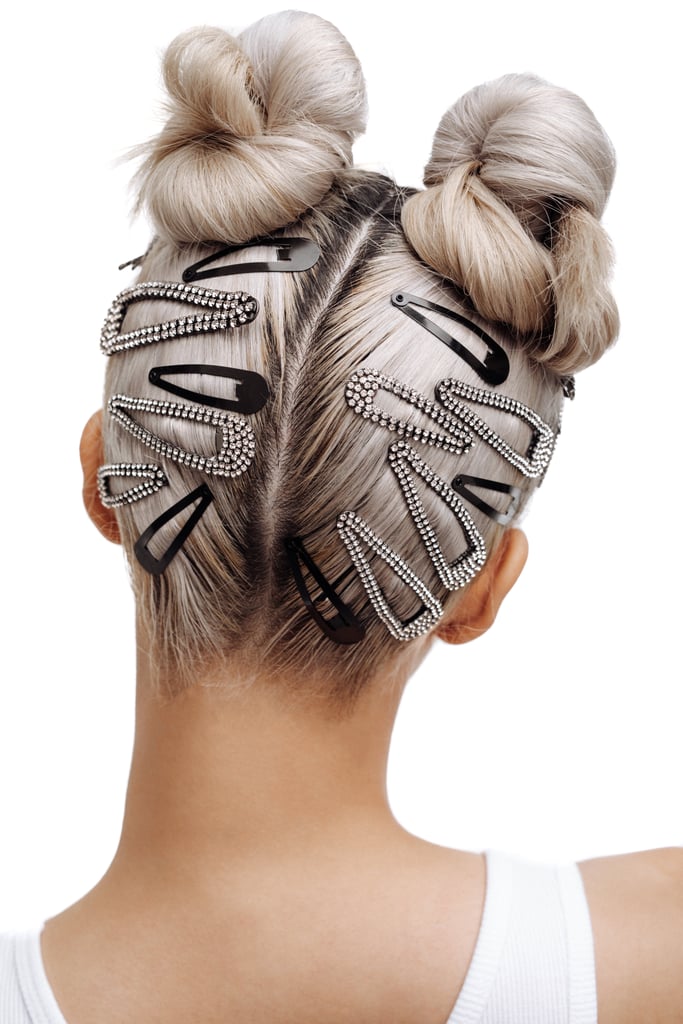 People Are Covering Their Hair With the Shiniest Accessories, and We’re Into It

In not-so-surprising news, really, really shiny things are having a moment. Ornate, bejeweled hair accessories, which include straight pins, snap clips, and chains embedded with crystals and pearls, aren't exactly new — you might have owned a few in grade school — but are catching the eye of our favourite celebrities, fashion brands, and beauty enthusiasts alike.

The precious accessories made appearances at the most recent season's fashion week, as hairstylist Justine Marjan worked long strands of pearls down influencer Sira Pevida's hair for the Chanel show in Paris. Jawara, the lead hairstylist at Area's New York Fashion Week show, also fixed long veils of rhinestones (some even extending from the hair to cover the entire face) onto the models before sending them down the runway. The stems springing from some of the floral crowns at Rodarte were covered in pearl beads.

Celebrities have also found a way to slide chunky jewels into their hair. Hairstylist Kristin Ess secured a pearl-studded bow onto actress Lauren Conrad's hair. Ariana Grande kicked off her tour with rhinestone snap clips surrounding her signature ponytail. Awards season hadn't glittered as much as it did this year as Leticia Wright had a constellation of pearl pins nestled in her hair at the Oscars, music artist HER wore rhinestones down her part at the Grammys, and Cardi B had an up-do wrapped in gold pearls at the Grammys.

We're not saying you have to wrap your hair in thousands of dollars worth of Swarovski crystals (that is, unless you want to). We're saying that if you want to throw on a jumbo crystal encrusted clip or throw in a bow covered in pearls, we're not going to stop you. If you're inspired as much as we are, check out our picks for the prettiest jewel-encrusted hair accessories, ahead.`

Makeup
I Tried Pai's Bronzing Drops, and It Helped Me Nail the Post-Holiday Glow From Home
by Jessica Harrington 3 days ago

Piercings
What to Know About the Trendy, Front-and-Centre Conch Piercing Before Getting One
by Jessica Harrington 4 days ago