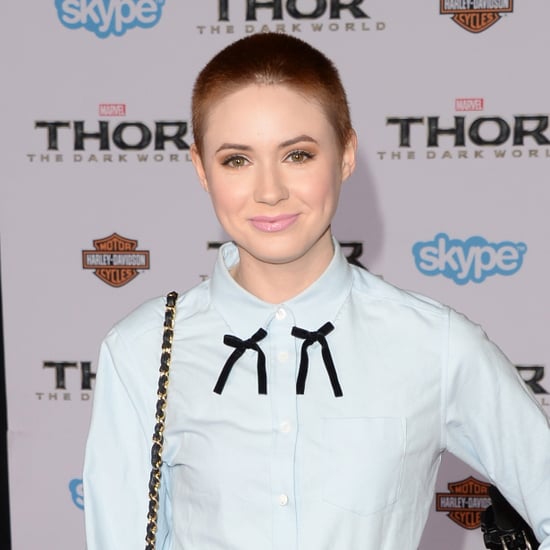 When Karen Gillan revealed a shaved head at Comic-Con, we were shocked. With such great prosthetics on offer now, she definitely didn't have to go bald for her role as Nebula in Guardians of the Galaxy. But Karen obviously knows comic-book fans aren't impressed by a bald cap, and we love her for going the whole hog to get into character. However, now that filming is over, the long process of growing it out begins. Last night we saw Karen hit the red carpet for the first time since early September, as she supported fellow members of the Marvel universe at the LA premiere of Thor: The Dark World. And for the first time in months, she has hair! That trademark red is slowly growing back, and it looks as if Karen's going to pull off a short cut. The incredibly flawless skin helps, but reddish brown eye shadow, perfectly tweezed brows, and a pale pink lipstick finished a pretty, modern look perfectly. We're so excited to see how the stylish Scot works her short hair in the months to come — will she ever go back to the long locks she sported in Doctor Who?