The biggest sports event in America took place last night in Miami, as the New Orleans Saints played the Indianapolis Colts for the NFL championship. I'm not sure if any of you actually saw the Super Bowl as it was on very late last night, however, today, the news is buzzing with all of the latest celebrity-filed photos from the big night. Stars like Kim Kardashian (whose running back boyfriend Reggie Bush took home the trophy), Queen Latifah and Carrie Underwood, all wore their hair styled in ponytails. Kim's and Queen's were long, slicked back, straight and extended, whilst Carrie's had volume at the crown and curls at the end. We know that most of you wear a little bit of makeup to sporting events, but how do you typically wear your hair? 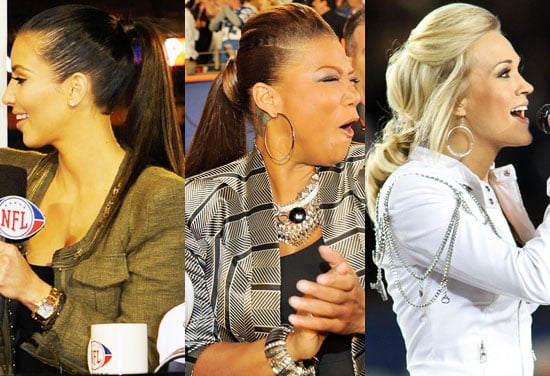 SKIMS
A Skims Shapewear Collection For Brides Has Arrived, and Yes, There's Something Blue
by Kelsey Garcia 25/9/20