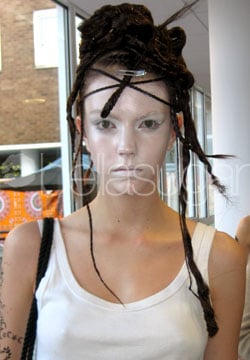 I couldn't have been happier about the way that London Fashion Week ended. The last show (and in my opinion, one of the best) that I went to see was Inbar Spector . The clothing was sexy and fresh and mostly black with a few surprises in baby blue and white. However, what really got me excited was the dynamic and long plaited hair extensions weaved together and secured in a messy nest on the top of the head with a few straggly face-framing braids.

Also, the makeup was different than anything I've ever seen. While it reminded me a little bit of last season's Gareth Pugh Show, sans the blue accents, it was a striking contrast against the collection.

Talented (and friendly to boot) makeup artist Lan Nguyen explained that the geisha white foundation, lips and lashes were inspired than none other than Icelandic singer, Bjork.

Stay tuned for FabSugar UK's exclusive one-on-one interview with Inbar Spector herself on Friday! For now, to find out all about the ultra-pale makeup products used behind the scenes, read more.

Makeup
14 Waterproof Mascaras That Won't Move an Inch, No Matter What Life Throws at You
by Jessica Harrington 5 days ago