Despite the displeasing beauty connotation that the term acne has, I can assure you that in the fashion world, the brand is quite the opposite. Swedish designer Jonny Johansson created "not a rich, but cool" collection that included earthy mauve and mustard tones in lots of leather and hints of metallics and electric blues to suit its wide audience. Not to take anything away from Jonny's designs, he and MAC lead makeup artist Lynsey Alexander along with Lucia Pieroni decided on a "cool, but boyish and almost androgynous makeup look that is powerful, clean and strong" on the models backstage to complement the clothing. 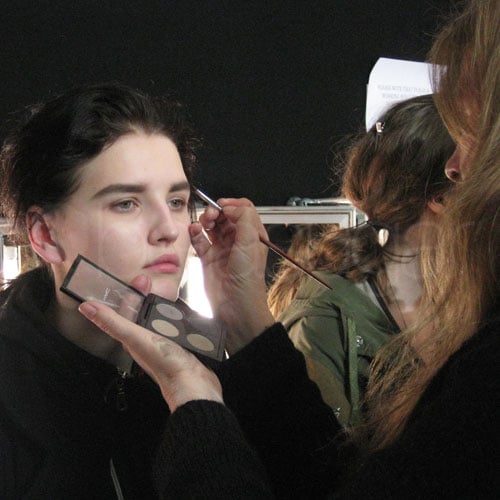 The face was fairly natural using Studio Cover Concealer and Invisible Powder. Cheeks were basically bare with a touch of Vanilla Pigment on the highest point of the cheekbones to catch the light, and just under the brows. Also, on the eyes was a medium brown Paint Pot in Groundwork, and lips just had a bit of Concealer on them topped with Lip Conditioner. The real focus was a strong brow shaded into a straight shape with a colour that was slightly darker than the hair colour of the models. No mascara was used, however lashes were curled. How do you feel about this wearable runway makeup style?