Terry Barber, Director of Artistry for MAC Cosmetics took time out of his busy backstage schedule at the Jean-Pierre Braganza show to tell me how much he loves FabSugarUK! Thanks Terry, we love you too! He also told me that the inspiration for this outrageous makeup style was "not grunge rock and roll, but mannequin rock and roll. Think Thierry Mugler ... and Gerry Hall with red lips and red eyes to keep it modern. It's not a decadent look, but more reminiscent of the 80s and 90s. I love a show being a fantasy." 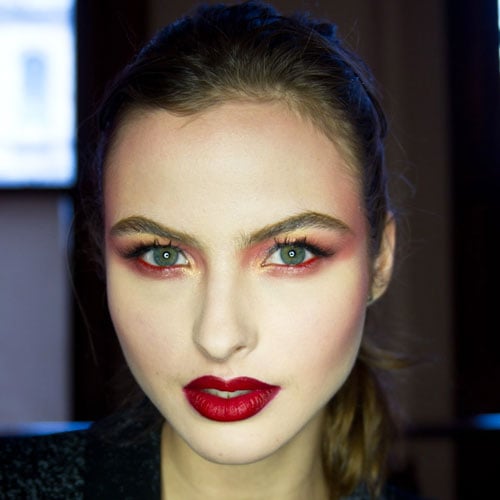 To create a fierce, sculpted, couture-style face, Terry used Colour Corrector Concealer and then pressed a new Electric Coral MAC Pro Pigment from next season into the eyes and cheekbones. Superslick Black Liquid Liner was used to draw a feline shape and #36 false lashes were cut in half and shaped into an angle. Lips were designed to look like a lacquered electric guitar so Cherry and Vino Lip Pencils were used along with Runaway Red AW '11 (a new lipstick) under Clear Lipglass.