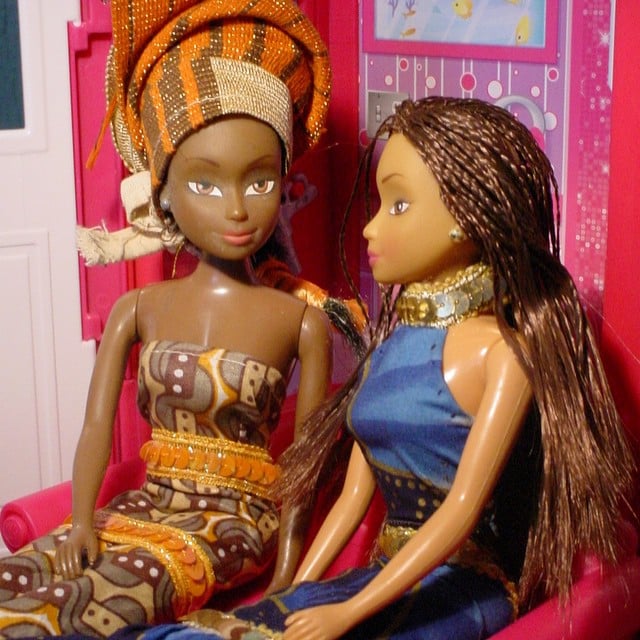 Meet the Black Dolls That Are Outselling Barbie in Nigeria

The rebellion against Mattel's basic Barbie continues as the Queens of Africa dolls take root in Nigeria. Lately, we've seen the rise of anti-Barbie businesses popping up around the globe. Lammily has stretch marks and acne, Tree Change Dolls are Bratz without the drastic makeup, and now Queens of Africa is offering a range of darker skin tones. And the thing is: they are outselling Barbie.

The dolls were created by Taofick Okoya, and each is inspired by the three primary tribes in Nigeria. Nneka is Igbo, Azeezah is Hausa, and Wuraola is Yoruba. In addition to the three Queens of Africa dolls, there are also three Naija Princesses. What sets these figurines apart from the classic black Barbie is the fact that they are shrouded in African culture. The colourfully printed outfits are influenced by the traditional fashion of each tribe. You can also select the hairstyle — braids, curly braids, rubber-wrapped hair twists, straight, and more. Headwraps are also included with some of the outfits. Okoya created these unique dolls to replace the white Barbies his own daughter played with.

"Even though we live in Nigeria, there was a lot of Western influence, which might have been responsible for her wishing she was white," Okoya told Elle.com. "It made me aware that I needed to make her proud and happy being a black African girl." He also says the next step is to release fuller-figured Queen dolls because every little girl deserves a doll that looks just like her — whether she is black, white, Asian, Indian, tall, short, full-figured, or thin. It's time we stop teaching young girls that Barbie represents the beauty standard. Every girl is gorgeous in her own right.