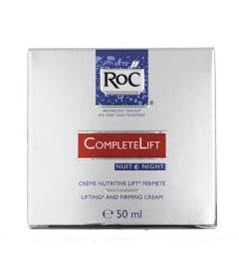 So it turns out that you really can't believe everything you read. One of the UK's best-selling anti-wrinkle creams has been told it will have to scrap it's adverts after advertising watchdogs ruled them 'misleading'. Well-known brand Johnson & Johnson have been ordered to remove the newspaper adverts for RoC Complete Lift cream after the ruling that there was no evidence that the cream reduced wrinkles.

The ads for the cream claimed that the product 'has a cumulative and lasting lifting effect'. As well as removing the adverts, the Advertising Standards Authority also ordered the company not to repeat the claims. In addition, they ruled against the featuring of a model holding a tub of the cream and a tape measure, alongside the line: 'Measurable lift in just eight weeks.'

The RoC advert also claimed that a patented ingredient in the £18 cream called THPE was 'clinically proven to work in just eight weeks of use.' Johnson & Johnson insisted that the claims were supported by an eight-week clinical trial on women aged 45 to 65. However, after investigating the claims, the authority said they were unproven. "We concluded the ad was misleading." a spokesman said.

Johnson & Johnson aren't the only beauty brand to have used misleading claims in press and TV advertising. In the past few years the Advertising Standards Authority has ruled against adverts made by Avon, Nivea, Clarins and The Body Shop.