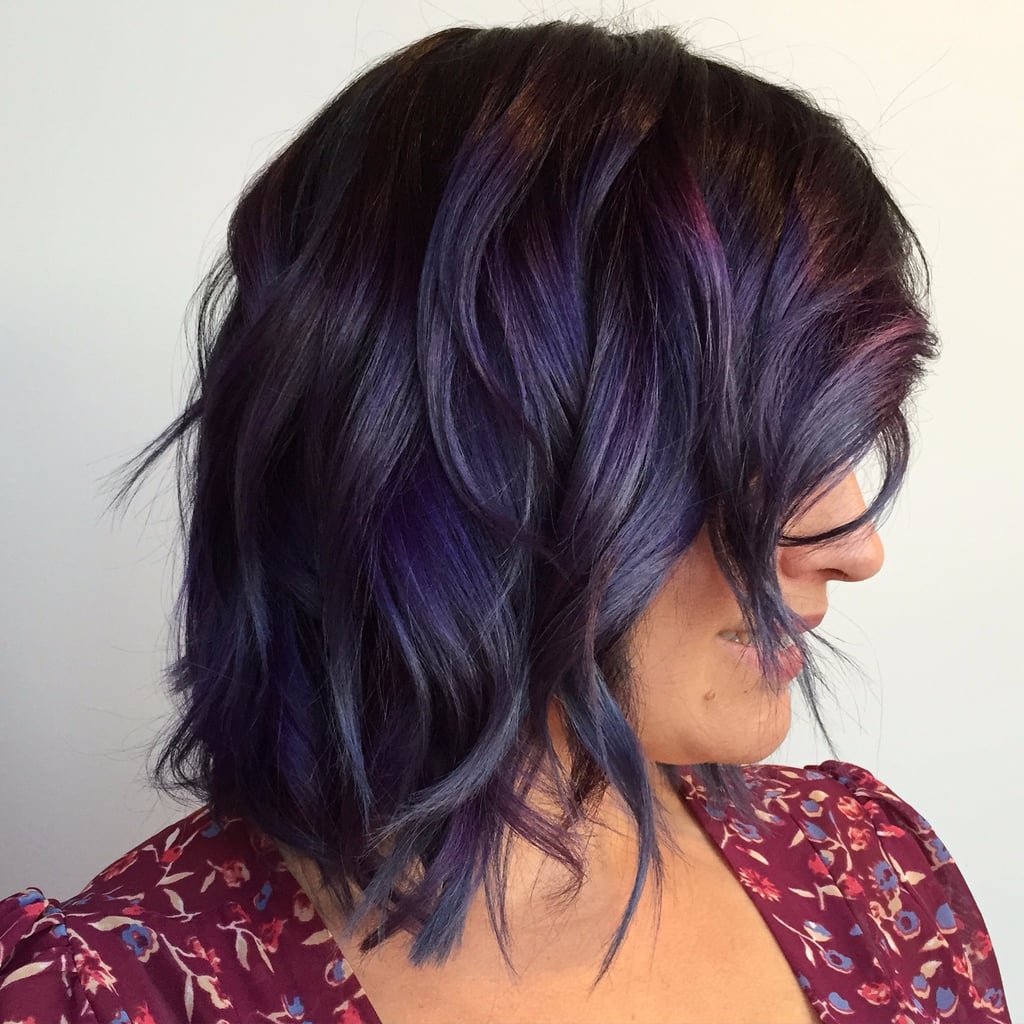 Brunettes Will Swoon Over These Winter-Friendly Rainbow Hair Ideas

When I first covered rainbow hair in the Summer of 2014, I was spotlighting a select few women who were bold enough to rock unexpected colourful coifs in everyday life. Since then, the style has evolved to become a universally beloved look. Whether you're walking through the streets of London, New York City, or Hong Kong, you'll see dozens of varied manes, including rose gold hair, amethyst strands, or denim dye jobs.

Equally apparent as these vibrant heads of hair is that the rainbow trend is especially popular among blondes (both natural and bleached). This is because light locks are an excellent foundation for electric dye . . . the colour just pops on top. As a brunette, I felt jealous of this advantageous hair colour and bemoaned my darker 'do. That is, until colourist and Brush In Hand owner Hannah Edelman created the now-viral chocolate mauve trend, which incorporated the client's naturally brunette roots.

According to Edelman, almost all hair needs to be prelightened for rainbow.

"I ask my clients to imagine they have a half white, half dark brown piece of paper in front of them," said Edelman. "If they painted a pink line with watercolour paint across both halves, where would they see the colour? Only on the white paper. Semipermanent hair colour is the same: completely translucent." She added, "You cannot get around the fact the hair needs to be lightened."

In the world of hair dye, there is a colour wheel that assigns numbers to (natural) hair colours, starting with one — black — and ending with platinum 10. To tint their strands with rainbow shades, brunettes need to lift their natural colour to a minimum of a level six on the hair colour wheel (which is the darkest shade of blonde you can be without being a light brunette).

That said, if you are wary about making the plunge and fully committing to platinum blonde, you can make the process easier on yourself and your hair. Try an ombré balayage style, which will fade nicely into a standard blonde and require much less upkeep than a completely bleached foundation.

The rainbow hue you select will also indicate how much you should lighten your hair. "Blues and violets should have a level eight or nine base," said Edelman. (These are pale blondes.) "For reds, oranges, and yellows, and greens, hair needs to be lifted to a level seven or eight," but she acknowledged that red will be visible (albeit less powerful) on a level six blonde. Those who feel passionate about achieving pastel hair should know that you must bleach your hair all the way to a "level 10 with minimal warmth" (white blonde).

Now that you're likely feeling more intrigued about pursuing colourful hair, we have good news. Edelman has divulged her favourite Autumn/Winter rainbow styles that cater best to brunettes. Should you be convinced that you won't be able to pull off your top pick with your complexion, don't be: your skin tone should not be the ultimate deciding factor.

"Vivids are already breaking the rules," she said. "You can rock anything as long as you're sassy." So whether you're in search of a more subtle style or a vivid rainbow look, you'll find some serious inspiration when you read on.

Hair
This Space-Bun Hack Worked Wonders on My Flat, Unwashed Hair
by Renee Rodriguez 2 days ago

Skin Care
"Lip Tenting:" the Buzzy New Filler Trend Everyone is Talking About
by Kelsey Castañon 3 days ago