Makeup artists are embracing colour again for Spring! Bright blocked colour eyeshadow was a major theme at New York Fashion Week with designers from Betsey Johnson to Victoria Beckham and Oscar de la Renta embracing saturated hues for models' eye makeup. Now it looks like the trend is being picked up by London designers. Yesterday Michael Van der Ham's show featured models with blocks of yellow eyeshadow worn heavy up to the brow. Mary Katrantzou, similarly, used blocks of bright pastels on her models. (It reminded me of last Spring's Balenciaga makeup.) On Saturday, Louise Gray's show also worked intense bright coloured eyeshadow on the lid and underneath the eye. (Check out the look on the left below.) Personally, I'm loving this! It's such fun, and a nice counter-trend to the ultra natural look which many designers have been working with. Although, it will take bravery to sport colour-blocked tangerine on the street! Are you a fan? 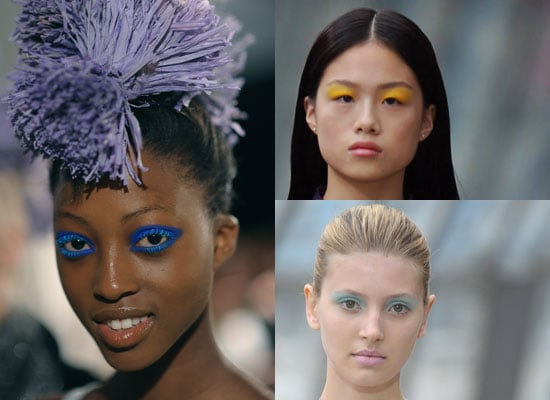