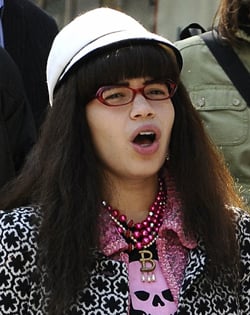 Sometimes I feel my whole life's work is dedicated to the making of pretty. Not just myself, but friends, family, you guys; I even like to make my cat look a little more attractive! Beautiful people apparently earn more, have more friends and happier lives and yet with a recent article in The New York Times it seems that ugliness is making a timely comeback.

Of course, if beauty is in the eye of the beholder then so too is ugliness. It is shocking to think that in our enlightened age ugliness is still associated with evil and fear, with villains and monsters. Think of the recent Halloween characters —the Wicked Witch of the West, Freddy Krueger and repulsive zombies.

However, according to the paper, ugliness has recently emerged as a serious subject of study and academic interest, not least because of the success of television’s Ugly Betty, which ABC promoted with a “Be Ugly” campaign stressing self-esteem for girls and young women. Various sociologists and writers have begun to examine what it means to be ugly. They have suggested that, while much of it goes unnoticed, there is actually widespread discrimination against the unattractive.

To find out how beauty ideals are being challenged, just read more.

“It hasn’t been politically correct to talk about uglyism,” said Anthony Synnott, a professor of sociology at Concordia University in Montreal, who is publishing a paper next month on ugliness. “But there’s no reason for us to think that beautiful people are actually good and ugly people evil, yet we do.”

Some cities in the US, including Washington, San Francisco and Santa Cruz, California, have actually passed laws banning employment discrimination based on looks. However, legal action on behalf of the unattractive can be complicated, as obviously no-one wants to think of themselves as being ugly. Sherry F. Colb, a law professor at Cornell explains,

“One pitfall is the distinction between people’s identities as members of a race, religious group or gender, versus as a member of a group of ugly people. Because of successful identity politics, people have come to identify profoundly with other kinds of groups, but it’s not likely with ‘I am an ugly person and let’s have a meeting of all ugly people.’ Most people in general would want to disclaim membership. It’s like declaring yourself a member of the clueless.”