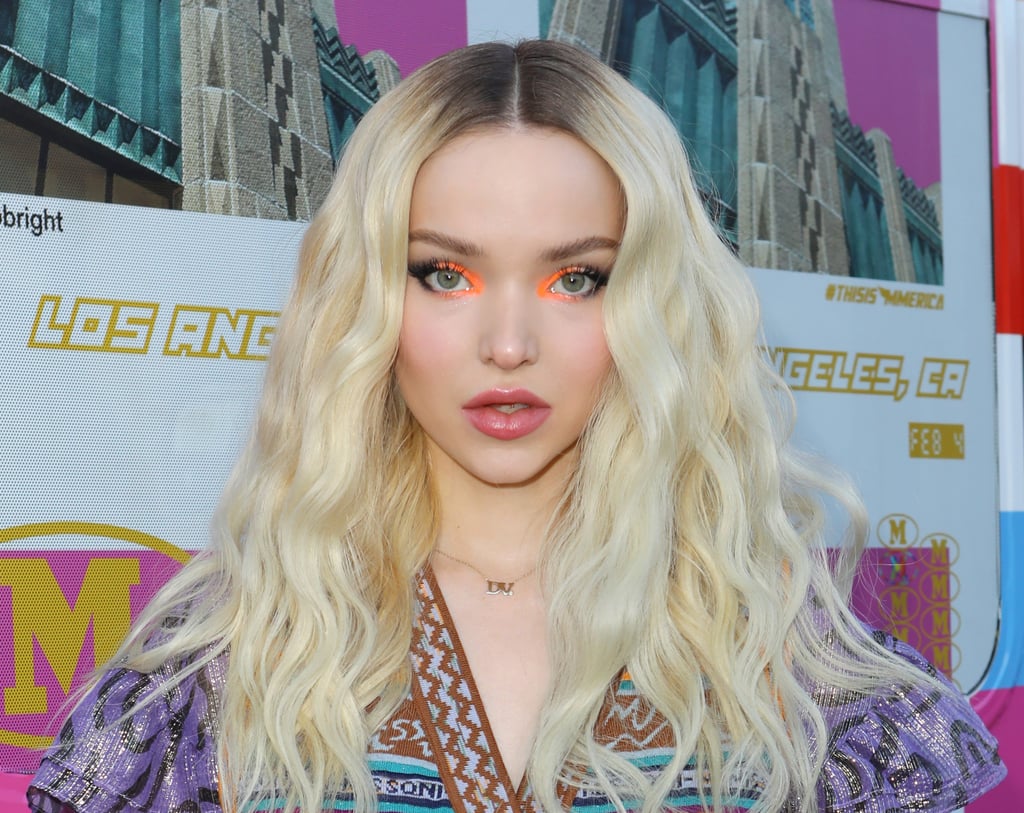 We've never been more convinced to try a pop of colour in our next makeup look, and it's all thanks to Dove Cameron's neon orange eye shadow. The Descendants actor stepped out to attend the M Missoni Fall 2020 presentation in Los Angeles on Tuesday and wore an eye makeup look that caught our attention immediately. LA-based makeup artist Jenna Kristina created the look, and it appears we weren't the only ones obsessed with the look: Jenna Kristina's Instagram followers left lots of love (and orange hearts) in the comments.

In addition to double tapping (and leaving our own orange hearts in the comments section), we slid into Jenna Kristina's DMs to ask her exactly how she created the look. Luckily, she obliged, not only giving us a step-by-step, but also a break down of all the products she used, most of which you can pick up at the drugstore.

"First, I applied Maybelline New York Tattoo Studio Cream Shadow in Chill Girl. I use it as an eye-shadow base because it helps hold any product I put on top of it," Jenna Kristina tells POPSUGAR. "Next, I created a nice, carved-out crease with a cool taupe colour and made a dramatic cat wing with Maybelline New York Tattoo Studio Gel Liner (£5) that really was focused on her outer lids. By not bringing the black liner all the way to the centre and to the inner corners really elongated Dove's already big doll eyes." To add dimension and touch of shimmer, Jenna Kristina then pressed Maybelline New York Masterchrome Molten Rose Gold Highlighter (£9) on top of Dove's lids.

Once the base, liner, and shimmery shadow were in place (which would have made a beautiful, subtle eye look on its own), it was time to add the flash of orange shadow. But before diving in with the electric-coloured pigment, Jenna Kristina added a layer of white liner eyeliner pencil to the inner corners of the eyes, drawing it directly onto the skin first and then buffing it out with a brush. "Placing the white down first is superimportant to get that true bright colour," she says. "And I do one eye at a time because once the liner dries, the shadow doesn't stick to it as easily." Then, using that same brush, Jenna Kristina pressed the Neon Orange Eye Dust (£4.50) from UK-based, cruelty-free makeup brand Stargazer London on to the area where she applied the liner.

Jenna Kristina's next step is probably the most important and the secret to why Dove's neon makeup looks so dreamy: "To get that colour to fade in to the rest of the shadow so it truly looked like a burst of colour, I mixed [the orange] with that same Masterchrome Rose Gold Highlighter. I actually shaved some of it off and cut it in to some of the orange pigment." Then using the same shadow brush she'd been using the whole time, she took the highlighter-and-orange-pigment mixture and packed it onto the very inner corners of the eyes. "Then where I wanted the orange pigment to fade out, I used the same brush, but my pressure was much softer."

To complete the look, Jenna Kristina finished with fake lashes and multiple coats of waterproof mascara. "A look like this needed a full black lash, so I used Ardell's half-lash strip (£6) on the outer edges of Dove's eyes and layered Maybelline New York Lash Sensation Waterproof Mascara (£9) on top."

Read on to see all angles of Cameron's bright, bold, and beautiful neon orange makeup.