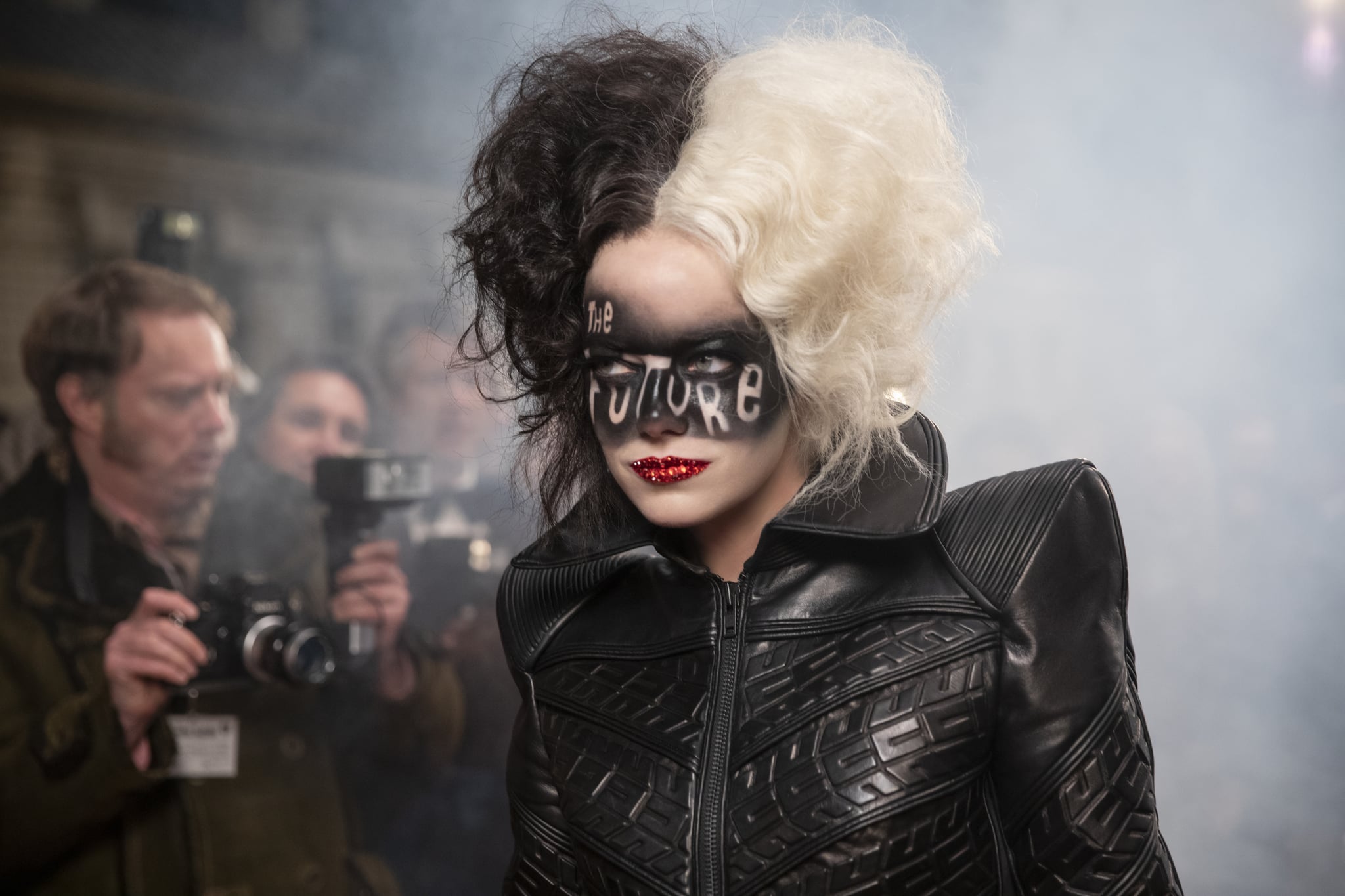 In the original 101 Dalmatians, Cruella de Vil's defining and diabolical feature is undeniably her black-and-white dalmatian (gulp) fur coat. One could argue, however, that the iconic character's beauty look — her two-toned hair, blood-red lipstick, and exaggerated eyebrows — is just as integral (if not more so) to the character's memorable persona. It's something that BAFTA Award-winning hair and makeup designer Nadia Stacey wanted to continue, and expand upon, with the multitude of looks she's created for Emma Stone in Cruella, the prequel to the 1996 live-action film that stars Stone as Cruella and Emma Thompson as the Baroness. The film explores the pair's turbulent relationship and the rebellious early days of how Cruella's wicked character came to be — a journey that Stacey helped illustrate through Cruella's hair and makeup reinvention.

Set in 1970s London amidst the punk rock revolution, the influences of hair and makeup were both essential to not only the storytelling of that time but also the title character's rebellious evolution of Estella to Cruella de Vil. Stacey emphasised that her brief was minimal, and it shows through each and every hair and makeup look throughout the two and a hour film. No beauty look was too outrageous for the team, especially for Stone, who was "up for anything" when she sat in the hair and makeup chair — and that's exactly how Cruella would want it.

It's hard to count how many standout looks there are in the film because each is bigger, bolder, and more extravagant than the last, all in keeping with the all-important "homemade" feel to them (which we'll get onto later). Stacey strikes a perfect balance between reinventing Cruella de Vil as we know her and weaving subtle (and not so subtle) nods to the original character that we all know and love. 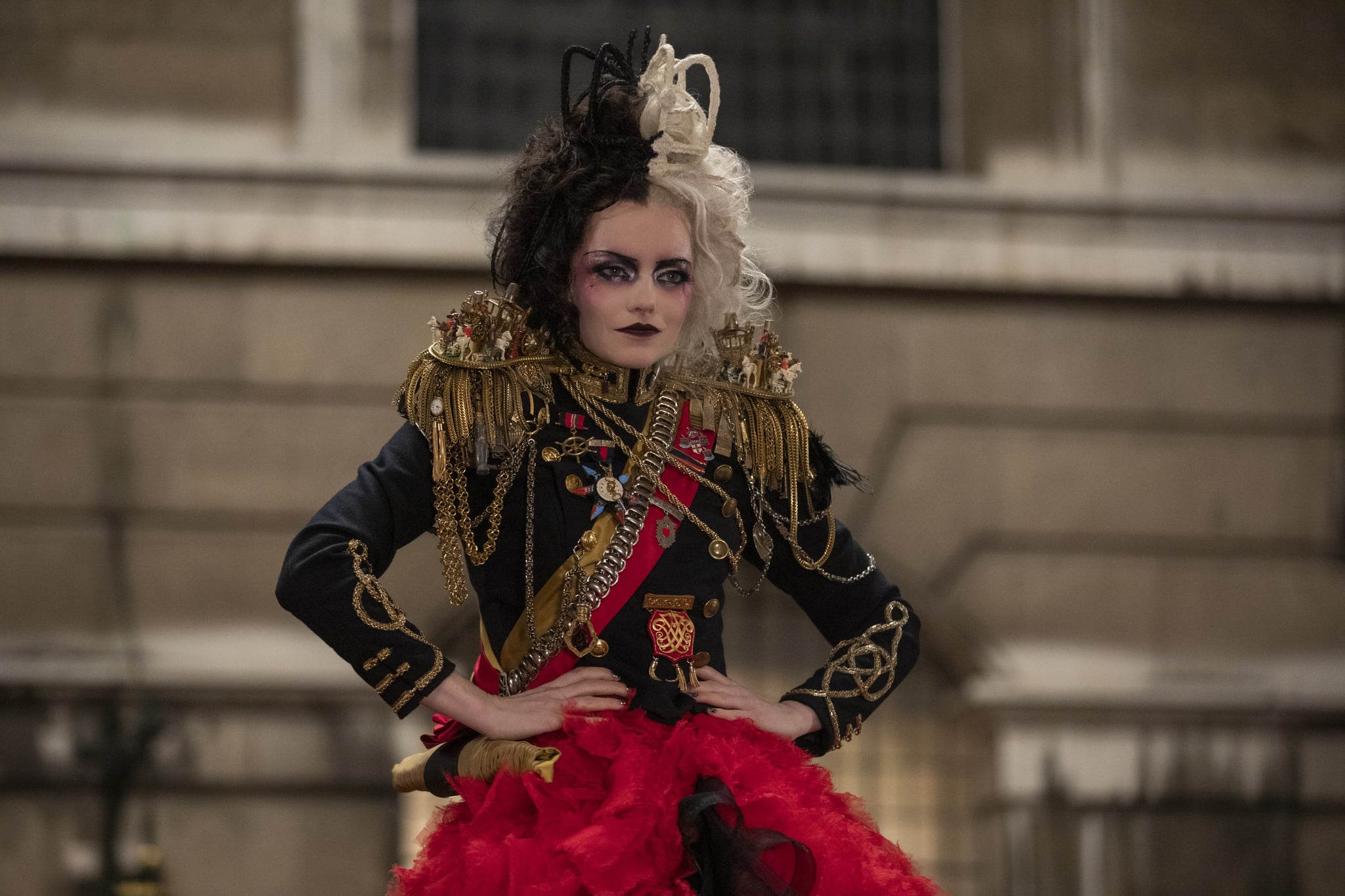 Watching the film, it's pretty clear that Stacey was given loads of creative freedom. "In the greatest way, the freedom was kind of unlimited," she told POPSUGAR. Stacey and costume designer Jenny Beavan spent a lot of time together working through their many ideas and references before presenting their plans to director Craig Gillespie and producer Kristin Burr. The two quickly learnt that when it came to hair, makeup, and costume "nothing was too far or too big". This freedom meant that the creative teams weren't restricted to any boundaries; they could really run wild when bringing the eccentric villain to life.

The historical references for the film span far and wide. "I had every reference from the 18th century to the 1950s to the '60s," Stacey said. "I had Galliano, McQueen, Westwood, avant-garde hair shows, lots of drag — I watched RuPaul's Drag Race while I was working on it," she added. (Side note: a Cruella-inspired challenge on Drag Race needs to happen.)

Much like the actual punk rock era in the '80s, for the film's punk scenes, it was important to Stacey for Stone's makeup to feel "homemade" rather than like a glamorised version of punk style. "I wanted a home-done quality," she said. When I asked if Siouxsie and the Banshees was an inspiration, Stacey said that the punk band's lead vocalist was indeed a "huge, huge reference". "There was a massive picture of Siouxsie in the corner of my makeup station," she recalled, adding that "Siouxsie's eyebrow shape was probably one of the first staple references and was definitely something we constantly came back to; that was always in the shape of the makeup." As for who else was on the wall? "There was a girl called Jordan — I don't actually know if she was kind of a singer or a model or anything like that. I think she was just famous for being a punk at that time, but she was up on the wall; as was Nina Hagen, the German singer — she was also definitely a reference for all of us," said Stacey. 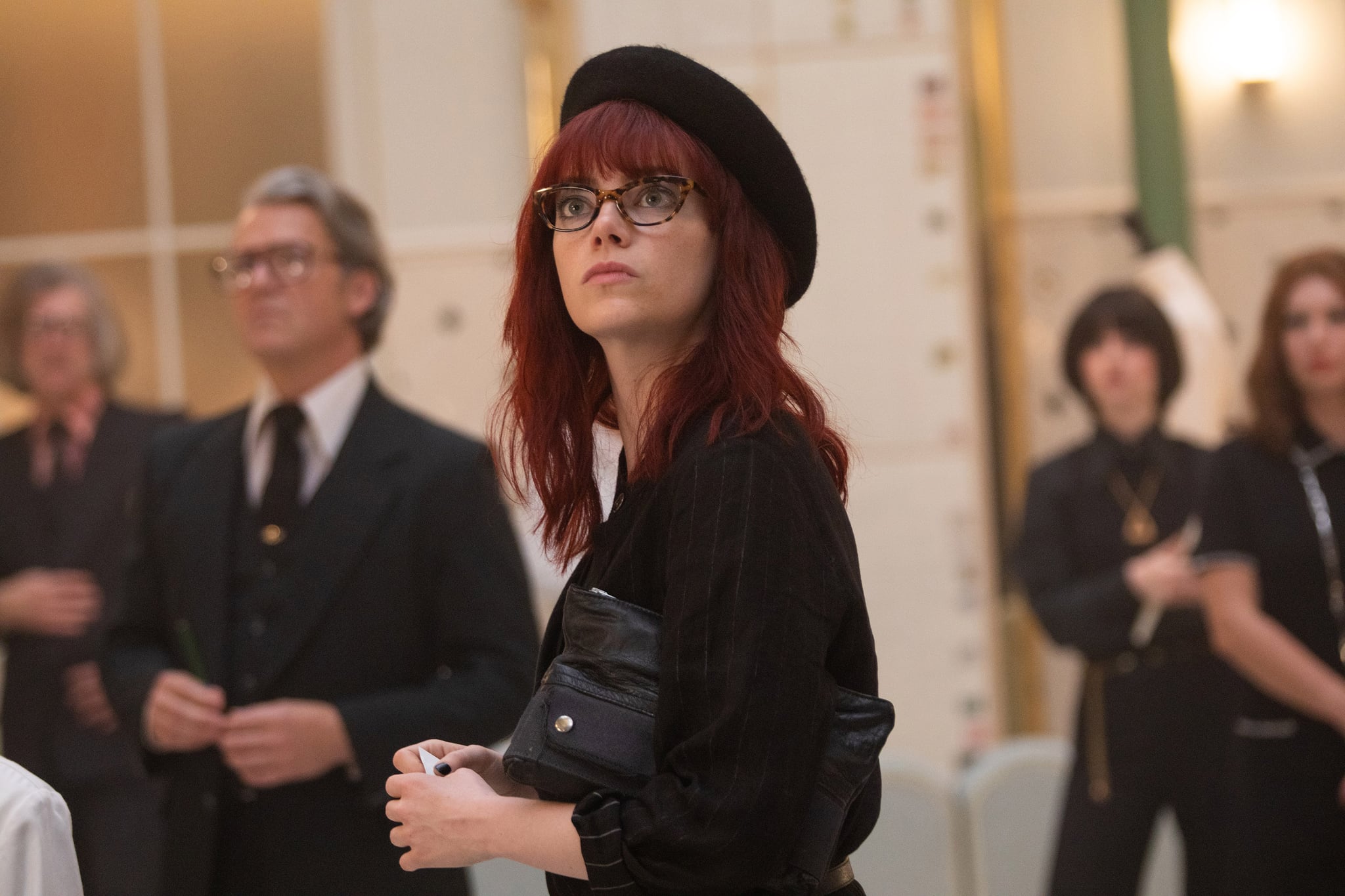 Hair and Makeup Helped Move the Storyline Along

Throughout the film, Stone shifts from Estella to Cruella, which gave Stacey a challenge to use makeup in a way that she's never done before. Estella wears minimal makeup (a little eyeliner using just one pencil), black nail polish, and scarlet red hair, whereas Cruella wears extremely heavy makeup (smoky eyes and blood-red lips with a sharp Cupid's bow) and, of course, her famous black and white hair. "I used makeup in the film like a tool of deception because [Cruella's] got to hide herself from the Baroness," she said.

Aside from using it as a tool for her to disguise herself, Stacey noted that she wanted to give Cruella a sense of confidence through her makeup to get the revenge she so desperately desired. "She needs to be on the front page of the papers the next day, so it was about giving her empowerment." Stacey explained that this was also inspired by drag makeup. "I found that with drag, or that early glam rock look, makeup and hair was used to create these personas and a different kind of confidence in yourself — an alter ego," she said. "[The transformation] of Bowie to Ziggy Stardust was absolutely in hair and makeup and costume, and that's what we were doing with Estella to Cruella."

The More Extravagant the Hair and Makeup, the More Emma Stone Was Into It

Thankfully for Stacey and her vision, Stone was "up for anything" when it came to the hair and makeup. "She's amazing, because obviously when you're on screen (particularly if you're playing the lead character), of course you want to look amazing up there, but [Emma's] not vain in any sense," Stacey explained. Stone was game for it all, even some looks that were more experimental, like the graphic "The Future" look.

Throughout the entire process, "Emma was totally up for all the looks, and actually the bigger they went, the more she was really into it," Stacey said. In fact, the creation of the beauty looks was integral to Stone developing her character. "When [Stone] was finding the voice for Cruella, she'd start to do that a lot more with the makeup on," Stacey recalled. "It's lovely as a makeup artist, to see that [character] coming alive in the chair; to see her start to change." 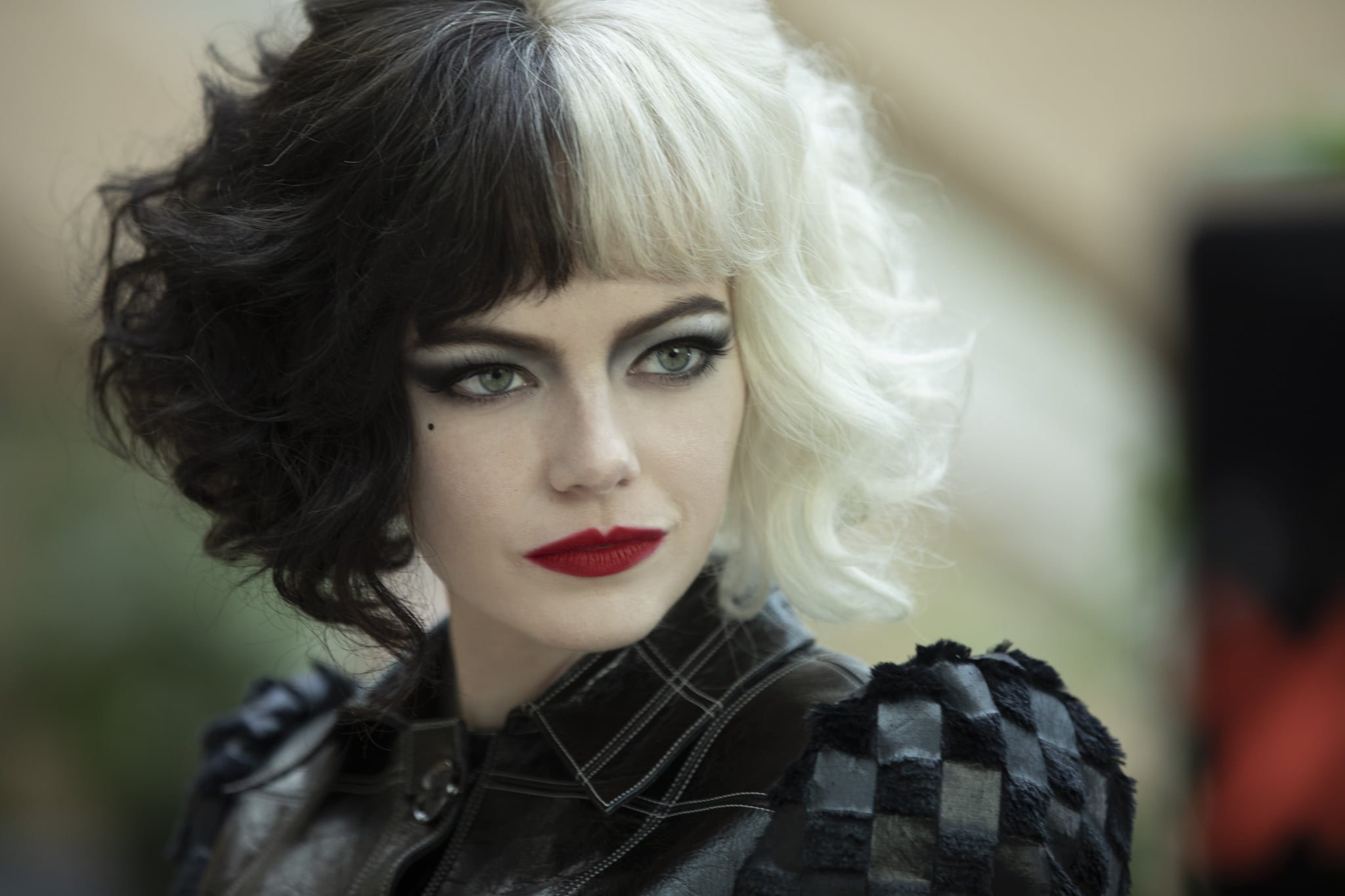 By far, one of the most memorable, if not the most memorable look of Cruella's, was when she had the phrase "The Future" stencilled across her face during one of the many scenes where she was attempting to grab the media's attention. The newspapers are central to Cruella building her brand and outdoing the Baroness, and one of the key headlines read: "Cruella, is she the future?" Stacey knew she had to incorporate it by going bold, so she brought out the big guns — the Sex Pistols font.

"I had all of these Sex Pistol references on mood boards, including the album cover for Never Mind the Bollocks on the wall," Stacey recalled. "I saw the font on the cover and thought, 'How can we portray this moment when she's saying she's the future?' because it's not written on a costume. Then I thought, 'Is it mad if I write it across her face?' — turns out, it's not," Stacey laughed. She said she "tentatively" putting the idea on Stone and Gillespie, and their response was: "Go for it!"

There Were A Lot (and We Mean a Lot) of Wigs

The film is filled with period parties and balls featuring some serious voluminous hair, which called for a lot of wigs — we're talking 152 of them for the Marie Antoinette ball scene alone. Stacey couldn't even believe how many wigs there were after watching the film, describing it as a "conveyor belt" of wig production. She explained that there are scenes when the only person not wearing a wig is Mark Strong, who plays John the Valet. "There's a shot of black-and-white wigs or the 18th century ball with those huge, powdered wigs — masses of them," she said. "You'd look around set, and there would be wigs for as far as you could see in a massive marquee. It was just incredible." 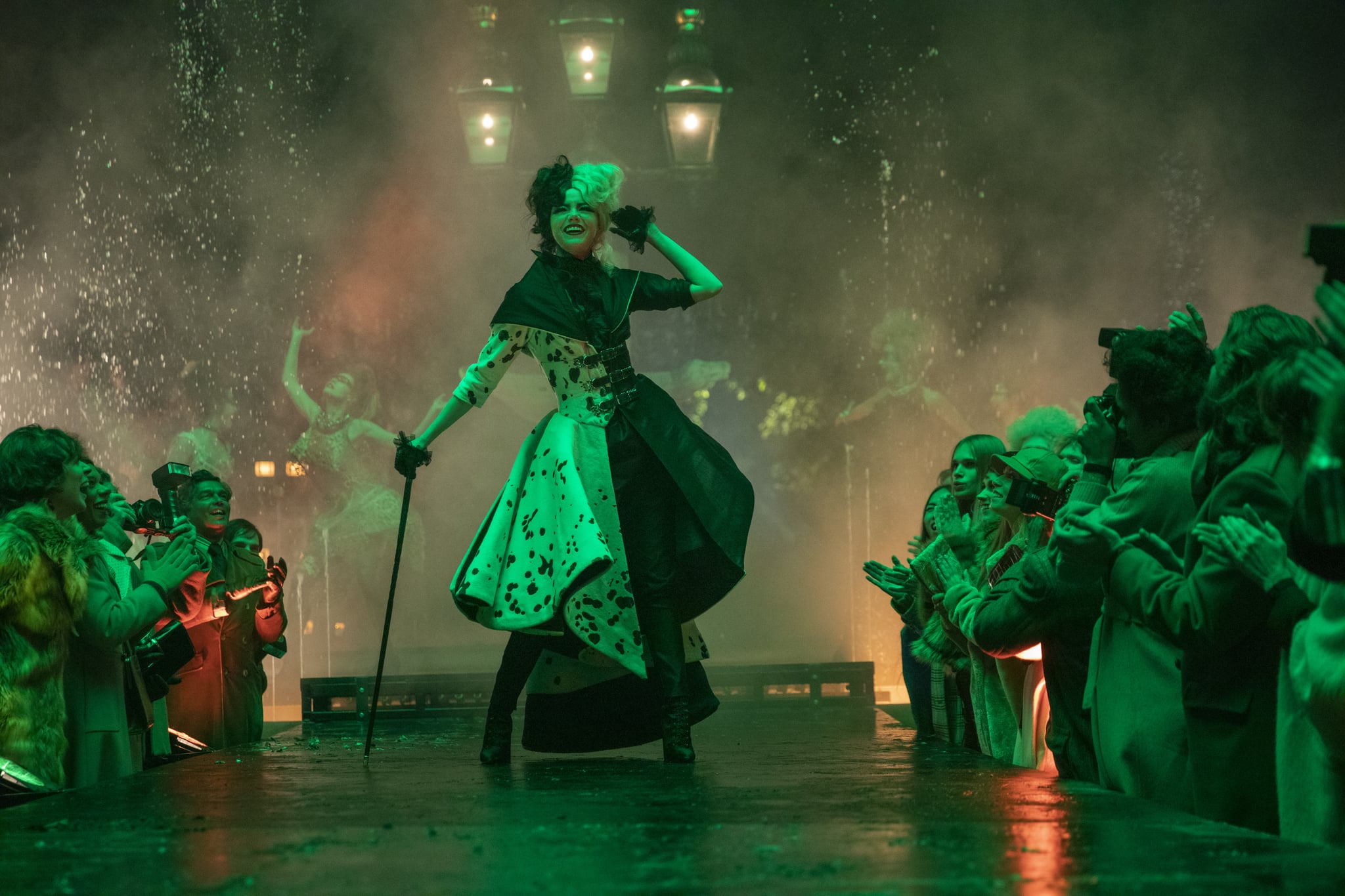 There's a Subtle Nod to the Glenn Close's Cruella

Nails certainly aren't the focal point of the beauty looks in Cruella, but that doesn't mean they were overlooked. "As Estella, I always wanted her to have black [nails], which are a bit punky, to make it very believable." But as Cruella, Stacey felt that she needed to "glamorise" her look slightly. Cruella's nails were one of the aspects that Stacey did turn to Glenn Close's version of the character for a little inspiration. Remember those incredible nails on top of her gloves? "I did toy with the idea of doing [nails on the gloves] but instead we had the nails made the same shape and colour, just not on gloves, so it was just a little nod to the old Cruella," Stacey said.

Cruella is available on Disney+ and in cinemas from 28 May, 2021 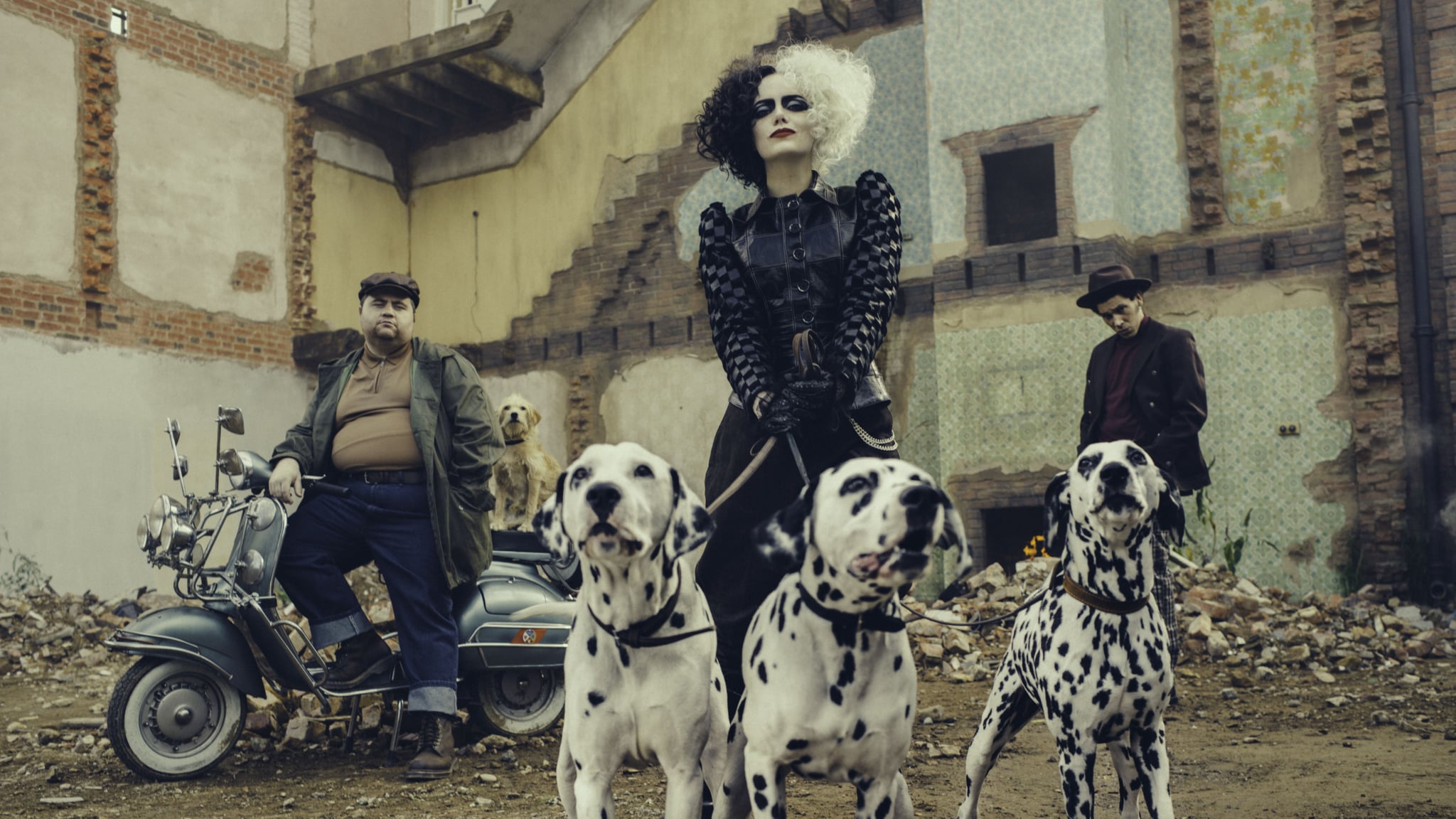 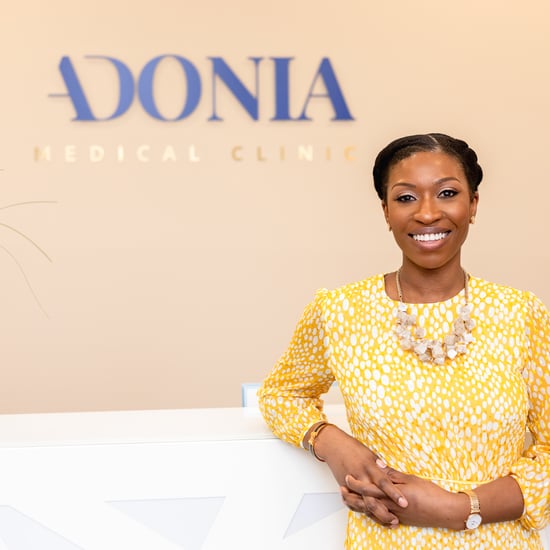 Untold
Dr Ifeoma Ejikeme on Her Aesthetic Medicine Journey: 10,000 Logged Procedures and 16 Years of Training
by Tori Crowther 4 days ago 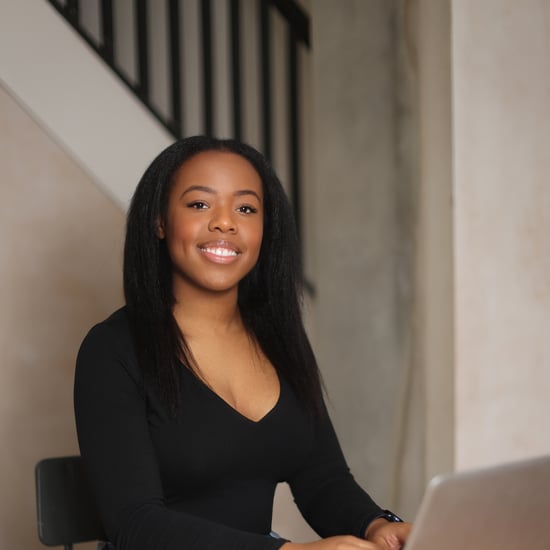