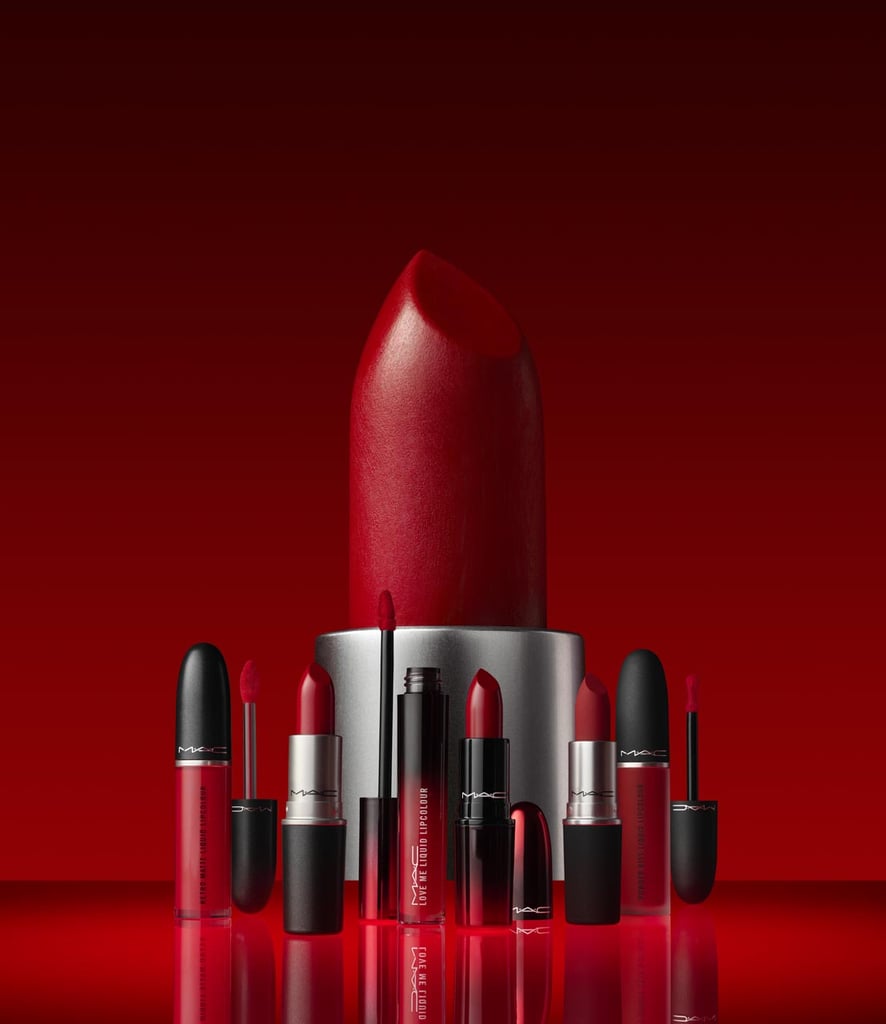 MAC's Ruby Woo lipstick is like the Beyoncé of the beauty world. Not only is it mononymous (all you have to do is say "Ruby Woo" and people will know exactly what you're talking about), but it also needs no introduction. Created in 1999, the red lipstick continues to be one of MAC's bestselling shade 22 years on; according to the brand, four tubes of Ruby Woo are sold every minute around the world, and five tubes are sold every hour in the UK. Those numbers will probably pick up this month, as MAC celebrates its star shade with a new lipstick lineup called Ruby's Crew, which introduces Ruby Woo in four of MAC's different lip colour formulas.

Ruby Woo is a lipstick loved by makeup pros, Broadway stars, ballet dancers, and A-list celebrities alike. "It's an iconic shade that's stood the test of time," makeup artist Michael Ashton previously told POPSUGAR. In 2013, before Fenty Beaty, Rihanna loved the lipstick shade so much that she teamed up with MAC to create her own version called Riri Woo that sold out in minutes. And this year, the brand did something similar with Rosalía, another Ruby Woo fan. For her "Aute Cuture" collection, which also launched in October, the Spanish singer/songwriter created Rusi Woo, which is more matte and has a lightly warmer undertone than the original.

So what makes this specific shade of red lipstick so special? First off, it looks good on pretty much everyone. LA-based makeup artist Allan Avendaño — who works with Sarah Hyland, London Hughes, Sabrina Carpenter, and Lucy Hale to name a few — explained that its Ruby Woo's brightness and blue undertones that make it so universal. He also added that the semimatte formula makes it less in your face than some of the newer long-wearing liquid formulas on the market.

Turns out, Ruby Woo's semimatte finish was the impetus behind its creation. In an interview with Fashionista about the history of the lipstick, MAC's director of makeup artistry Gregory Arlt explained that Ruby Woo was a happy accident — the result of the brand trying to tweak the formula of another iconic MAC lipstick colour, Russian Red. According to Arlt, to make the Russian Red formula globally compliant in the '90s, MAC's product developers made a teensy change to the texture, making it less matte and more comfortable to wear. Fans freaked out at the new not-as-matte and not-as-draggy Russian Red, so much so that the brand reverted back to the original formula. But just because Russian Red fans weren't pleased with the tweak to their favourite shade didn't mean the new version wasn't an amazing colour on its own. When top members of MAC's product development team saw the new colour, they loved it so much they decided to just make it a brand new shade called Ruby Woo. "It's the same combination of pigments, just put into a different base," "Arlt told Fashionista. "But it was a little brighter and more dynamic, and it just became a standalone colour."

Included in Ruby's Crew is Ruby Woo in its original format — the MAC Retro Matte Lipstick formula — dressed up in a crimson red tube with the words "Ruby Woo" written in a bold font. The limited-edition packaging is used for all the different Ruby Woo lipsticks in the new range, which includes the Retro Matte Liquid Lipcolour in Ruby Phew! (the brand's classic long-wearing liquid lip formula), Powder Kiss Lipstick in Ruby New, and Powder Kiss Liquid Lipcolour in Ruby Boo. Keep reading to see and shop all the different lipsticks in MAC's Ruby's Crew.

Festive Beauty
All I Want For Christmas Is Chanel's Sumptuous No. 5 Advent Calendar
by Sophia Panych 2 days ago