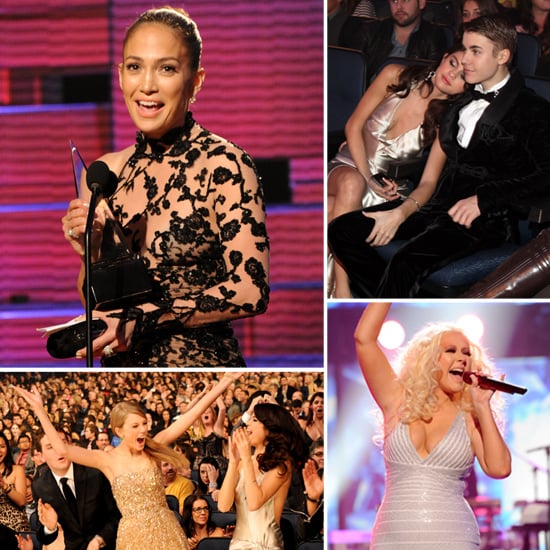 The 2011 American Music Awards kicked off with a duet from Nicki Minaj and DJ David Guetta, the first of 17 musical acts! They got things started after a star-studded AMAs red carpet on which stars like Katy Perry, Heidi Klum, Justin Bieber, and Selena Gomez posed for photographers. Maroon 5 was an early winner for best duo/group before Taylor Swift won her fourth favorite country female artist in a row.

Next up was a performance from Justin Bieber, who sang "Under the Mistletoe" while girlfriend Selena Gomez watched from the audience. Jennifer Hudson changed dresses to introduce favorite rap/hip-hop artist Nicki Minaj, who also tearfully took home favorite rap/hip-hop album honors for Pink Friday. Rihanna sent in a video thank-you for her favorite soul/R&B album nod, and Beyoncé Knowles did the same when accepting favorite soul/R&B female artist. Beyoncé couldn't attend the show since she was in the Big Apple promoting her new Live at Roseland DVD. Kelly Clarkson and Enrique Iglesias, with the help of Ludacris, were onstage for two subsequent performances. J Lo really brought the house down with a rendition of "Move Your Body" and "On the Floor" that included an actual Fiat as a prop — she has an endorsement deal with the car company! Pitbull sang with J Lo, and also later joined her estranged husband Marc Anthony and Lil Jon for a song.

Heidi Klum rocked her silver Giles Deacon to introduce an artist she and her family love, Katy Perry. Katy received an award of achievement for the five number one hits she's racked up this year. J Lo was next to take the podium as favorite Latin artist of the year, commenting on her "exciting and overwhelming" 2011. Christina Aguilera made a special appearance to sing with Maroon 5, and then Drake took the stage following an introduction from John Legend. Katherine Heigl and her husband Josh Kelley teamed up to present Taylor Swift with her ninth AMA, this time for favorite country album. She didn't have to wait long for the 10th, since Taylor also won artist of the year! Justin Bieber helped LMFAO wrap up the proceedings, and came out to do the shuffle during "Party Rock Anthem!" 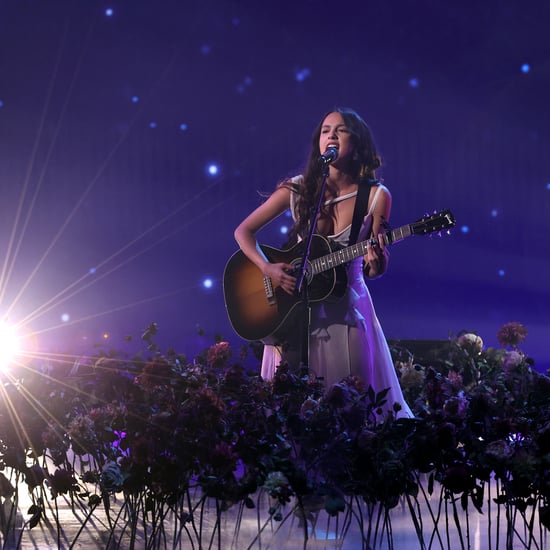 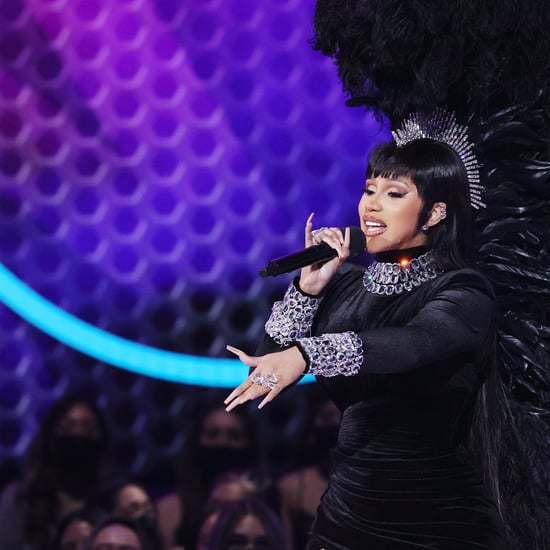 Award Season
Machine Gun Kelly and His Daughter, Casie, Always Have Fun on the Red Carpet — See Their Cutest Pics!
by Naledi Ushe 22/11/21