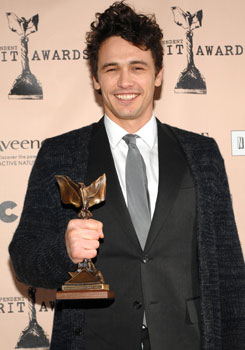 Before tonight's award season grand finale with the Oscars, Hollywood celebrated some of the smaller films of 2010 at the Independent Spirit Awards. Best feature Black Swan took home the most trophies, including one for Natalie Portman as she continues her winning streak. Before he gets down to hosting business tonight, James Franco celebrated a win for best male lead for 127 Hours, while Winter's Bone scooped up both supporting male and female.

Be sure to check out the red carpet highlights and vote on all of the fashion and beauty looks from the event. And don't forget to tune in today to see if the winners can have the same luck at the Academy Awards — we'll be broadcasting live!

To see the full list of the winners, just read more.

BEST SCREENPLAY
The Kids Are All Right

JOHN CASSAVETES AWARD (Given to the best feature made for under $500,000; award given to the writer, director, and producer)
Daddy Longlegs

ROBERT ALTMAN AWARD (Given to one film’s director, casting director, and its ensemble cast)
Please Give