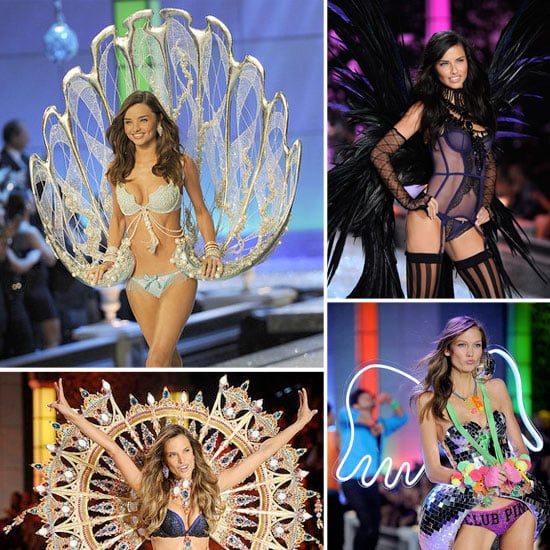 The Victoria's Secret runway extravaganza airs on CBS this evening! In honor of the big TV event, we're taking a look back at the show which was recorded at NYC's Lexington Avenue Armory on Nov. 9.

Between the musical acts and the amazing costumes on the angels, Nov. 9th was a night to remember. Candice Swanepoel was the first down the catwalk in the "Ballet" portion of the show, the first of six-themed sections that also included "Super Angels," "Passion," "Angels Aquatic," "I Put a Spell on You," and "Club Pink." They strutted, interestingly enough, to the song "You Make Me Want to Die" from Taylor Momsen's band, The Pretty Reckless! Candice was followed by Anja Rubik, Lily Aldridge, Alessandra Ambrosio, Chanel Iman, Doutzen Kroes, Adriana Lima, Miranda Kerr, and many more! This was a unique year from the company since they introduced at least 12 new models to the lineup.

It was hard to compete with the over-the-top outfits, gems, and wings, but the musical acts nearly did so. Kanye West was finally able to perform for VS after canceling his 2007 appearance after the sudden death of his mother, Donda West. He dedicated the event to her saying, "I lost my superhero, but now she's my superangel." Kanye went on to sing "Stronger" as the Angels walked by him on stage, then Jay-Z came out for an amazing duo on their Watch the Throne song "N*ggas in Paris." Beyoncé Knowles even came out to see Jay in action, taking a front-row seat only for the duration of the track. Jay and Kanye got the fashion crowd on their feet, and Orlando Bloom was seen doing a little fist pumping!

Orlando was front and center to cheer on his wife, Miranda. It was Miranda's first time on the VS runway since giving birth to Flynn at the beginning of the year. She took multiple turns down the catwalk and finally wore Victoria's Secret's $2.5 million Fantasy Treasure Bra. Orlando gave Miranda a couple of standing ovations, as one of the most enthusiastic famous attendees, which also included Stephen Dorff, Lake Bell, Maxwell, Jack Huston, Lala Vasquez, and Gossip Girl's Matthew Settle.

In addition to Jay and Kanye, Maroon 5 performed "Moves Like Jagger" and lead singer Adam Levine broke from the band temporarily to place a big kiss on the cheek of his angel girlfriend, Anne V. Earlier in the day while backstage, Anne V said she and Adam planned the moment. She said, "I'm a model, he's a singer, we're just doing our jobs and just happen to be together, so maybe we'll do a cute moment but nothing crazy. I'm very excited to have him next to me, it's very special." Nicki Minaj wrapped things up with a rendition of "Super Bass," with newcomer Karlie Kloss closing the show in her fluorescent wings.