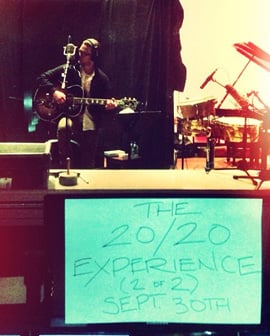 In just four months, Justin Timberlake will release another new album! His March record, The 20/20 Experience, will be followed up with a part two, which JT himself hinted will be released on Sept. 30. Yesterday, Justin posted a photo of himself in a music studio with the teaser.

Cinco de Mayo was a big day for Justin, who also took the stage at NYC's Roseland Ballroom. With his wife, Jessica Biel, in the audience, as well as pals Jason Sudeikis and Andy Samberg, Justin performed hits old and new to celebrate his new partnership with MasterCard.