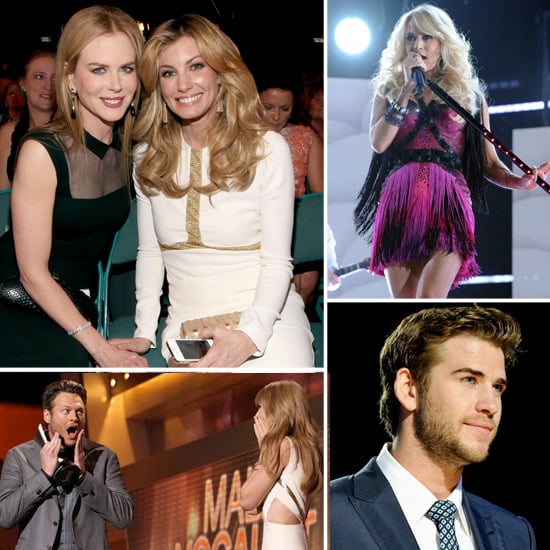 The annual Academy of Country Music Awards went down in Las Vegas last night with Blake Shelton serving as host. Lovely ladies like Nicole Kidman, Carrie Underwood, LeAnn Rimes, and Taylor Swift posed on the ACM Awards red carpet and then headed inside so the statues could be distributed to winners. It was an unconventional show — a couple even got married at one point in a ceremony officiated by Martina McBride! The Hunger Games star Liam Hemsworth was also called in to host the ACM Fan Jam. Big honors went to record of the year and female vocalist of the year winner Miranda Lambert, and her husband Blake got the corresponding male honor. Taylor Swift was crowned entertainer of the year in a hotly contested category. Blake even poked a little fun at Taylor's well-used surprised face when handing over the statue. The fun went down in front of a star-studded crowd that included Faith Hill, Tim McGraw, and even Ashton Kutcher.