Matt Damon and his The Adjustment Bureau costar Emily Blunt were together in NYC recently to chat about their movie at the press junket. The film, which opens this Friday, features a shady government organization that intervenes in a fate-like way to affect the lives of ordinary citizens. Both Matt and Emily shared about the presence of fate in their own lives, with him telling a story about the romantic way he met his wife. Emily, meanwhile, revealed her original career plans and made a few jokes about Matt's skills as a dancer. They said: 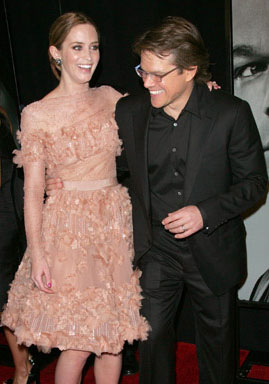 Has fate ever intervened in your life in a similar way to how the Adjustment Bureau works with your characters?
Matt Damon: I think it would be Emily's chance to work with me. It must have been one of those moments.
Emily Blunt: I have one story that is pretty cool. I remember I didn't get into this very amazing school that my sister went to, and I wanted to be just like my sister. It's a school called Westminster in London, and it's fiercely competitive — she gets in because she's a brainiac and I don't because I'm obviously not. And so I basically remember being at 16 devastated and my life was over, and I was so sad and felt so inferior that I hadn't gotten in. So I went to my second choice school, which had a good drama department. I previously hadn't considered acting, and I did a play through my school that went to the Edinburgh festival. I got an agent, and he's still my agent! And now I'm here with you nice people. If I'd gone to Westminster I wouldn't be doing this job — guaranteed!
Emily, what would you be doing if you didn't act?
EB: I had this really impressive idea that I was going to be a translator for the UN and be fluent in Spanish. I was going to do modern languages in university.
And Matt, what was that sort of moment for you?
MD: Clearly, for me, passing up the chance to be in Avatar in order to do Green Zone was one of those moments. Because Avatar didn't do very well and the DVD of Green Zone is just going to . . . [laughs] No — I do end up thinking about jobs. There are so many roads not taken. There is this Garth Brooks song called "Thank God For Unanswered Prayers," and I think of all those movies that I auditioned for or movies that I was desperate to get that I didn't get — that really turned out to be a blessing in disguise. Looking back on my life and everything, I tried to control as much as I could and worked as hard as I did, but a lot of it really is down to luck.
Any in particular?
MD: One of the biggest ones was, there was a Werner Herzog movie called Rescue Dawn that Christian Bale did, and Werner and I were talking about eight years ago about me possibly playing that role. I was really strongly considering it, and instead I met with the Farrelly brothers. I remember talking to my mother, and my mother said you don't always have to go into the jungle and lose a lot of weight. I did the Farrelly brothers movie and that's where I met my wife. And four kids later, that was a pretty fateful decision.

To read what Matt says about his lost dancing scenes, just read more.

Emily, is there anything you'd change about The Adjustment Bureau?
EB: I would mix it up with the hats I think. Maybe rock like a baseball cap once in a while. Maybe not even need the hats.
MD: It's hard to answer that without sounding like Miss America. 'Well, first of all, world peace!'
It looked like there was going to be a moment where Matt would bust a move, but somehow he got out of it. Is there footage of Matt dancing on the cutting room floor?
EB: I think [his] wife put the kibosh on that. She was there that night and she was like, 'Don't let him dance!'
MD: There is a lot of footage of me running around in a white shirt and a blue fedora . . . I definitely burst into song and dance a lot in that costume. It felt appropriate. I left the dancing to Emily, thank God. And it was nice to be in one of those movies where I wasn't the guy training my ass off. I was just sitting in the corner eating doughnuts.