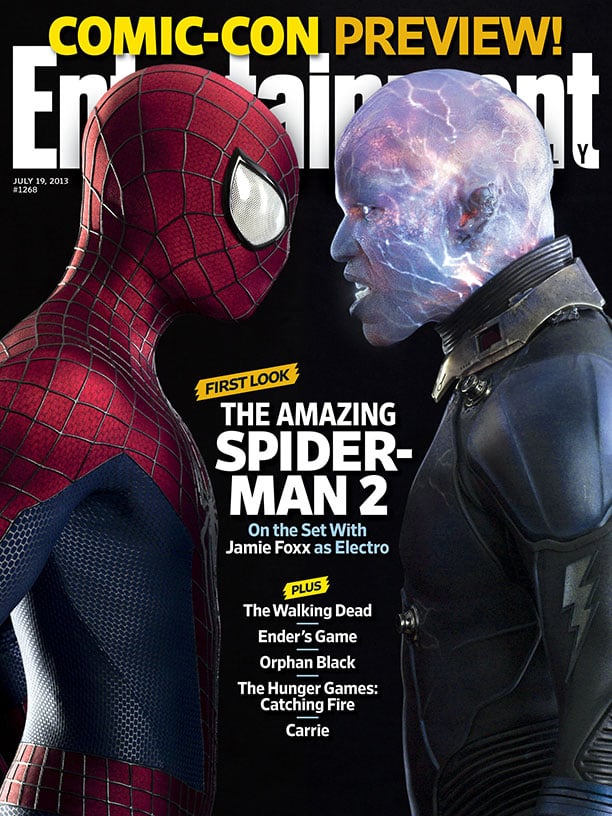 The Amazing Spider-Man 2 doesn't come out until next year, but next week, the cast will hit Comic-Con to talk about the movie. Ahead of that, Entertainment Weekly put the Spider-Man sequel on this week's cover, with star Andrew Garfield and new villain Jamie Foxx facing off. While it's cool to see Foxx in the makeup for Electro, the article inside is more interesting, because Garfield has some ideas about what the franchise should cover — specifically, Spider-Man's sexuality.

Garfield told EW, "I was kind of joking, but kind of not joking about MJ. And I was like, 'What if MJ is a dude?' Why can't we discover that Peter is exploring his sexuality? It's hardly even groundbreaking! . . . So why can't he be gay? Why can't he be into boys?" Garfield already has a candidate for who could play his love interest: Fruitvale Station's Michael B. Jordan. Garfield said, "I've been obsessed with Michael B. Jordan since The Wire. He's so charismatic and talented. It'd be even better — we'd have interracial bisexuality!" Even director Marc Webb has apparently heard of Garfield's idea — and his admiration of Jordan.