Your new Spidey, Andrew Garfield, had a big day promoting his movie at Comic-Con. Before the panel where fans were treated to some footage from The Amazing Spider-Man, he sat down for a press conference along with director Marc Webb and costar Emma Stone. Garfield showed off a self-deprecating sense of humor that was incredibly charming, and though he referred to himself as a "skinny spider monkey," costar Emma Stone effusively sang his praises. They also showed off a friendly banter that gives me high hopes for their onscreen chemistry as Peter Parker and Gwen Stacy. Check out the highlights: 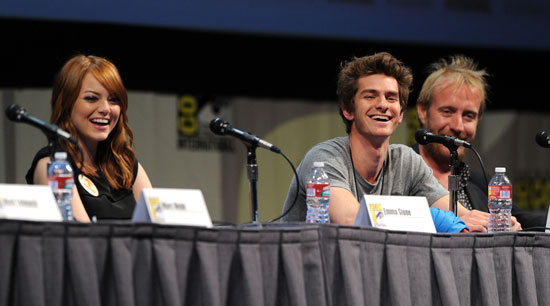 On how he found out he got the role:
Andrew Garfield: "These guys organized a pretty terrifying rouse. I was in Cancun at a press junket for The Social Network, and I was waiting to hear about whether or not I'd be able to fulfill a childhood dream, and at the end of a press day of talking about The Social Network, Amy Pascal's assistant got me and he said 'Hey, Amy wants to have a word with you in the suite.' So I walked in and there was a flip camera all set up and the person who answered the door was Marc Webb, and I was like 'This is going to be a turning point in my life.' They gave me a really special thing to tell my grandkids. I was confused because I was being treated like Elvis but I look like a skinny little spider monkey."

On why he loved the Spider-Man comics:
AG: "I love the idea of a skinny teenage kid beating the crap out of huge kids. That's always been a dream of mine."

On the romantic side of the movie:
Marc Webb: "I'm having so much fun putting together the scenes with Andrew and Emma. There's so much tenderness, and that's one of the reasons why I love Spider-Man, is this important romance."

On seeing Andrew as Spider-Man for the first time:
Emma Stone: "I walked in, and he was in the full Spider-Man suit . . ."
AG: ". . . scratching my ass."
ES: "Yeah, which was great. . . I went in and I needed to stand next to him, and I think I really inappropriately started touching him, and he was like 'Stop touching me.' It was pretty incredible because you couldn't see his face, it was just Spider-Man in there."

To see what Andrew had to say about meeting Tobey Maguire, plus Emma's thoughts on playing a superhero, just read more.

On seeing Emma in full costume:
AG: "Emma's natural hair color is blond, but I had never seen her as a blonde so that was interesting I guess. [To Emma] It suits you, I think, and so does the red."

On signing on for the role:
ES: "For me, it was Andrew. I think Marc [Webb] is amazing and I think that the producers are amazing and the script was so interesting, and as you've heard it's a different story, but it's Andrew, because my character's experience is everything with Peter, and it's her first love, and he teaches her so much and they teach each other so much, and it just made sense once I read with him and once I met him."

On interacting with Tobey Maguire:
AG: "I love Tobey Maguire's interpretation of the character. It's one of the things that reminded me of how much this character means to me, and when I watched that first Spidey film I lost my mind and I watched it twice in a row when I first saw it. And I had the wonderful fortune of meeting him after we finished shooting. I didn't seek him out, but he sent me a very very nice email once it was announced, giving me his blessing and it meant the world to me because I respect him so much as an actor."