Now that American Horror Story has arrived, it's time to work with what we've been given. We have a lot of new information about what lies ahead, but a lot of the season is still shrouded in mystery. We know there's a good chance we'll be dealing with the Lost Colony of Roanoke and that the story comes with echoes of the first season. And yet, we can't help but feel like there's more to it. There must be something going on outside of these strange new interviews and the "dramatic reenactment." And, well, we have a pretty good guess as to what it is: AHS season six could bring us face to face with the devil himself.

The Hints Ahead of the Premiere

Back in July, when we knew nearly nothing about the next installment, we crafted a plausible theory about a devil theme for season six. There seemed to be something significant about the fact that the very first promotional image for season six not only featured a six but also dropped in the sixth month of this year. It wasn't a far leap: 666. And just before the season premiere, FX's head of marketing Stephanie Gibbons also noted the significance of the number. "We were going into the sixth season and that number has a particular meaning in the horror realm." Not sure about you, but I can't think of many other things she could be referring to. So, before the season even started, we were on high alert. 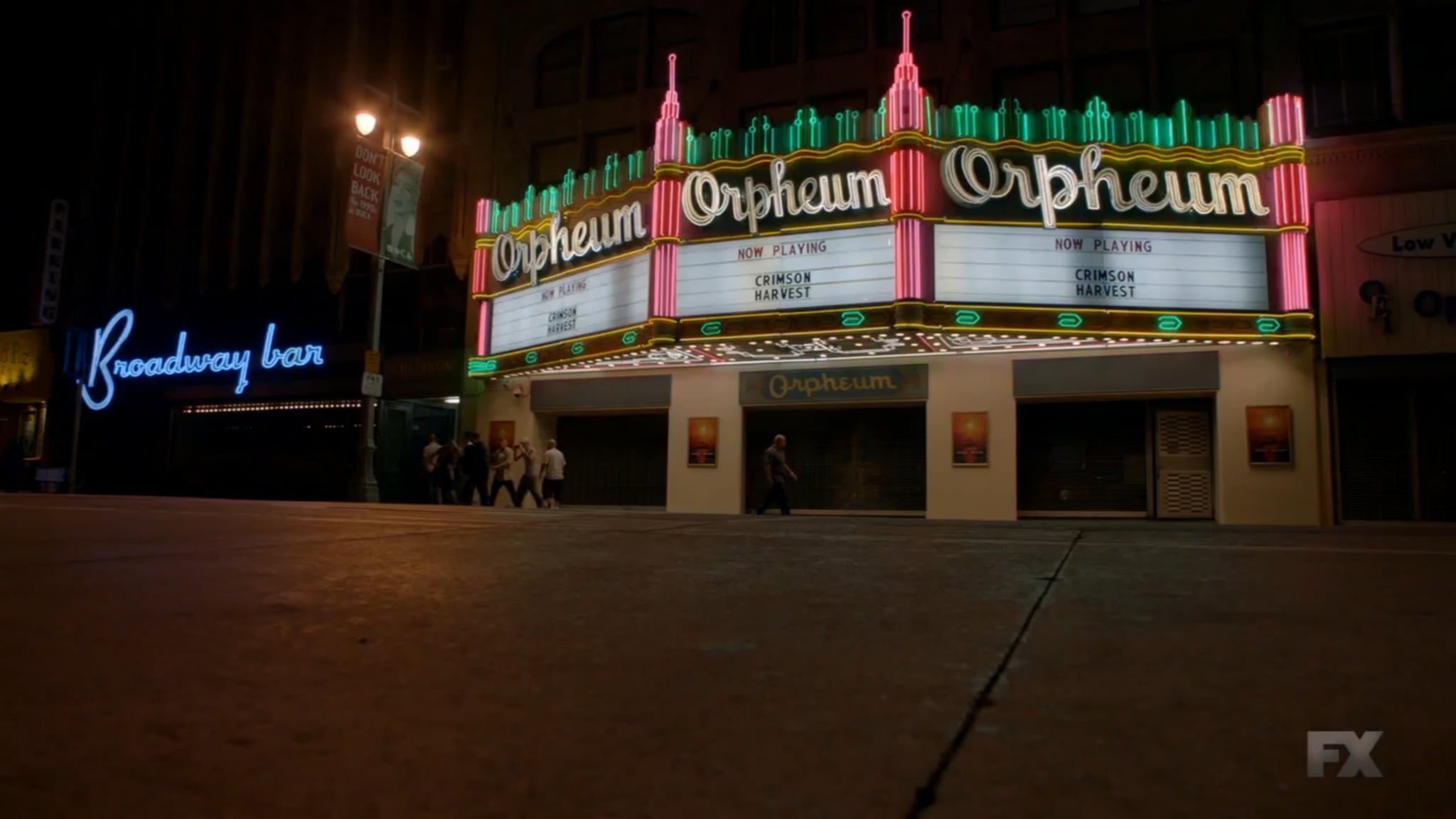 The first indications of a devilish turn occur in the first scene of the supposed "dramatic reenactment." It seems like a pretty innocuous scene, but if you read the marquee, you'll notice the title, Crimson Harvest. Suffice it to say, there's no actual movie with that title. The phrase itself seems to refer to a blood sacrifice, something we'll circle back to later on. Even the blinking green lights along the bottom of the marquee are interesting. If you'll notice, their blinking pattern reveals a "666" on the far left side. They're not exactly sixes, per se, but they're close enough. You can get a better look during a more pulled-in shot, just before "Matt" gets punched in the face. You might think this is a stretch, but it only gets more damning from here.

The Significance of the Pig Carcass 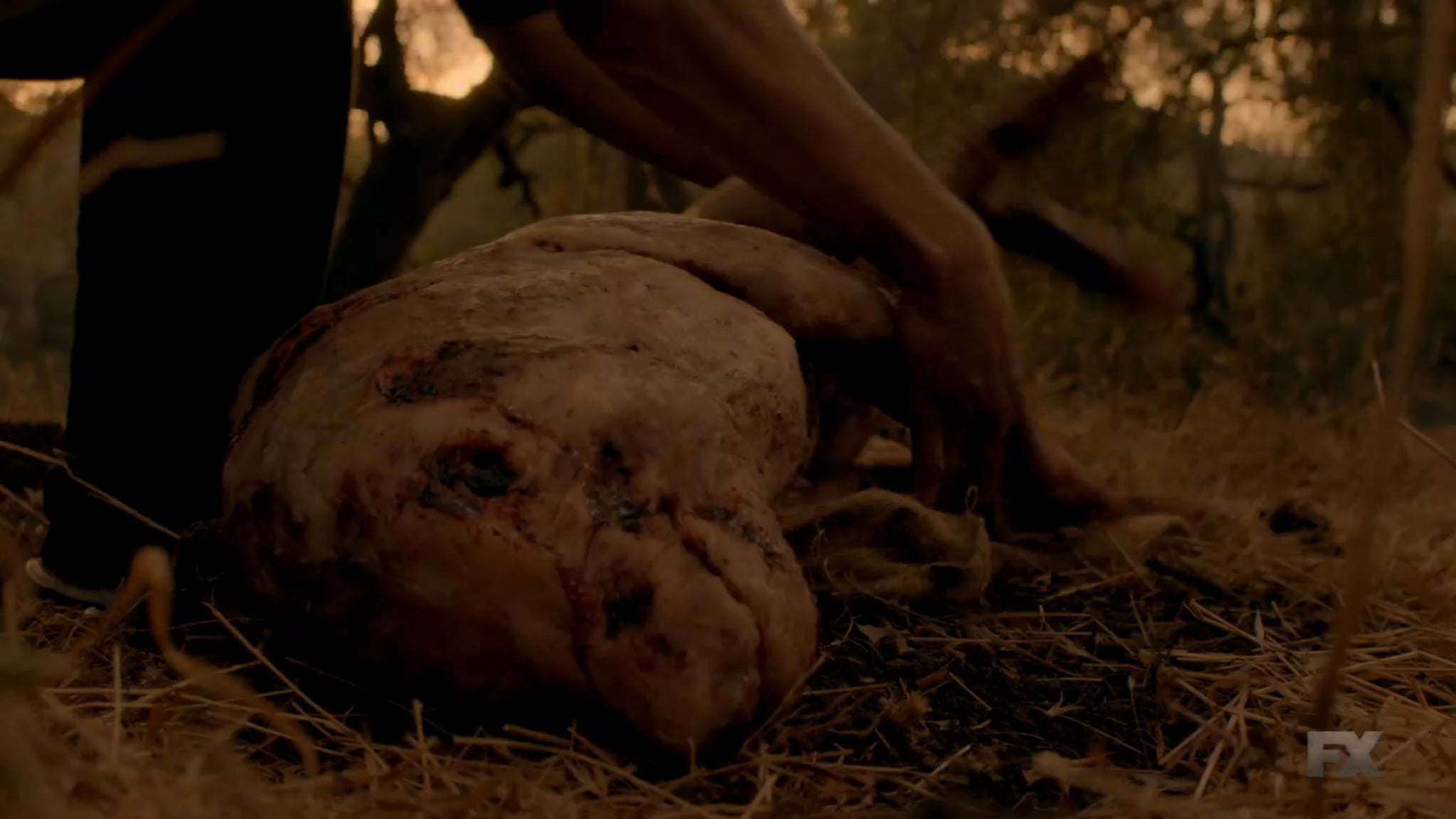 Many might think the presence of the pig brings us back to season one, where a man (Eric Stonestreet) finds himself plagued by the "Piggy Man," a horrifying murderer who wears the face of the pig. And, well, they wouldn't be wrong. In fact, a different iteration of this very individual appears in the f*cked-up video that "Shelby" and "Lee" watch in the basement of the house — but there's an occult connection to pigs as well.

The first correlation between pigs and the occult was actually drawn in the Bible. In the gospel of Matthew, the first book of the New Testament, Jesus Christ encounters two men who have been possessed by demons. According to the verse, "the demons begged, 'If you cast us out, send us into that herd of pigs.'" When Jesus told them to go, the demons "came out of the men and entered the pigs, and the whole herd plunged down the steep hillside into the lake and drowned in the water."

The references carry over into literature as well, most notably in William Golding's Lord of the Flies. In the novel, the stranded boys find a severed pig head, which they dub, if you haven't guessed, the "Lord of the Flies." The phrase translates roughly to the Hebrew word "Beelzebub," which, according to Dictionary.com, is another name for Satan. Considering that Lord of the Flies is one iconic piece of the literary canon, an allusion to the imagery on American Horror Story isn't out of the question.

The Thing About the Straw Dolls

This brings us, now, to the straw dolls. The most obvious connection to the straw dolls is witchcraft. The little figures seem reminiscent of voodoo dolls, or perhaps even the strange stick men of the Blair Witch. For the record, witchcraft and the occult go hand in hand, and that sort of dark magic is often associated with the devil anyway. There's an even more explicit link to the devil, though. You can find a mention of it in a book called Fields of the Lord: Animism, Christian Minorities, and State Development. In the text, author and associate professor of anthropology Lorraine V. Aragon writes of a historic group indigenous to Indonesia. When it's time for harvest (there's that word again), they "hang little straw dolls in the trees, hoping Satan will think they are people and enter into them." When we turn back to AHS, such dolls have been strung throughout the poor couple's home, and "Shelby" later encounters plenty more in the woods. By the time we reach the end of the episode, the involvement of the devil is explicitly confirmed.

The Preview of What's to Come

The last piece of the puzzle comes during the preview of the season. There is, of course, the ritualistic burning we glimpse, and then there's an explicit nod from "Shelby," who says, "Human sacrifice. They were practising devil worship." So, that's about as close to a confirmation as we're going to get. We may be digging into the Lost Colony and the mystery that surrounds it, but maybe there are greater stakes at play.