As if we need any more reasons to be excited about David O. Russell's '70s-set crime drama, a glittery new trailer for American Hustle is giving us an even deeper glimpse . . . at Christian Bale's bulging belly. The full trailer, featuring music from Johnny Mathis and Electric Light Orchestra, gives a bit more information about the plot and characters. Amy Adams and Bale play con artists conspiring to "get over" on their business partners until they're forced to cooperate with an FBI agent (Bradley Cooper) to undercover political scandals in New Jersey. Mainly, they're trying to take down corrupt mayor Carmine Polito (Jeremy Renner). 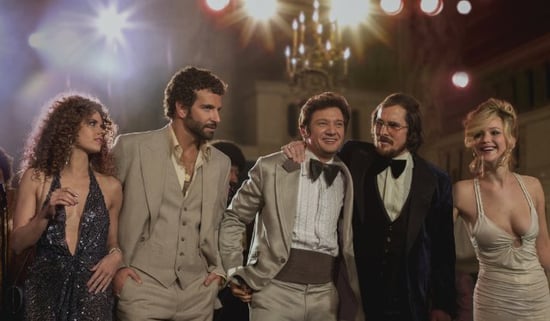 Though this is distinctively a Russell film, this trailer gives me flashbacks to Martin Scorsese movies like Goodfellas. This trailer has everything: Jennifer Lawrence is talking trash about her husband (Bale) in front of their son, Cooper getting an at-home perm, and there's a miniscule flash of Louis C.K. — 10 points to whoever spots him! The film opens in limited release on Dec. 13, then it'll be open in wide release on Christmas Day. Take a look at the trailer after the jump.