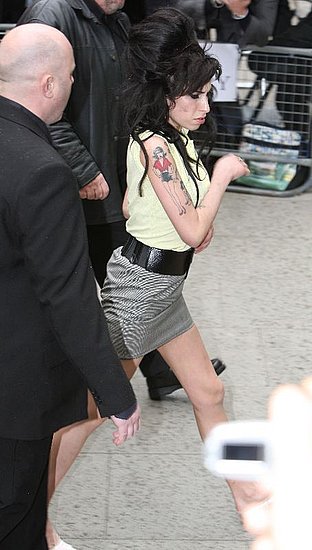 Following Amy Winehouse's arrest on Friday evening at Holborn police station in London, the star has been cautioned for common assault. Amy arrived at the station to lots of media attention, then spent the night in a cell before being questioned on Saturday morning.

Her spokesman released this statement:

"Amy Winehouse was questioned this morning at a London police station in connection to an incident in Camden in the early hours of 23 April, 2008. She admitted to a common assault by slapping a man with an open hand and accepted a caution. Amy was fully co-operative with inquiries and apologised for the incident. She thanked the police for their professional handling of the matter. There will be no further action taken. Amy is looking forward to continuing her work on new music in the studio."

The caution means she hasn't been charged with an offence, but it will be on her record and considered if anything similar happens in the future.

I'm really hoping this will push her to re-evaluate her lifestyle – with her father Mitch speaking out and saying she should be sectioned, as well as confirming she's been having an affair with her manager's assistant, it seems like she's in desperate need of some time out to deal with her personal problems.