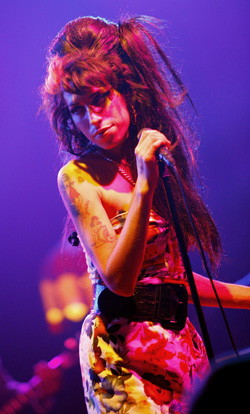 Amy Winehouse is suffering with the lung condition emphysema, her Dad Mitch has revealed to The Sunday Mirror.

The singer, who was hospitalised last week, could be in a wheelchair within a month if she doesn't stop smoking crack cocaine.

Doctors treating Amy at private London hospital The Clinic have also said that unless she takes their advice, Amy will need a permanent oxygen mask to survive.

Amy's Dad, Mitch, told The Sunday Mirror: "the doctors have told her if she goes back to smoking drugs it won't just ruin her voice, it will kill her".

He also spoke about his other worries for his daughter's health, as the doctors also found a lump:

"After lots of tests they found a lump in Amy's chest. A scan has shown it's not cancerous and there are no traces of cancer in her blood. But they might need to double check... At times Amy seems nervous about it but she doesn't panic until something's 100 per cent".

To see what Mitch had to say about Glastonbury, Blake and Pete Doherty read more

Amy has vowed to stay clean, and started a drug replacement programme on Tuesday. Mitch added that Amy said: "'Don't worry about me, Dad. I know I've got to stop taking drugs now'". Let's hope this awful experience will help her stay on the road to recovery.