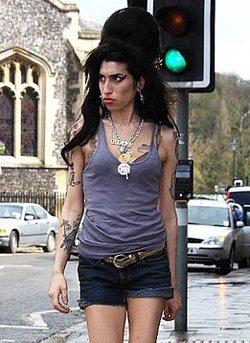 According to The Sun, Amy Winehouse has been given an ultimatum by her record label Universal — if she doesn't keep out of trouble she will never release another album.

The singer has been told that she has to stay clean if she wants to put out a third album with the label. A similar threat was made by Lucian Grange, European head of Universal, earlier this year to get Amy to rehab.

This ultimatum follows the revelation at the weekend that Amy cancelled a trip to the Bahamas that her label had arranged for her to begin recording her third album.

"Amy has been reminded of her responsibilities. Unless she is clean she will not be allowed to release another album.

"She took notice when Lucian talked to her earlier in the year and agreed to go to rehab. But she didn’t take it seriously enough.

"They would never release her from her deal, they would just not put an album out."

Come on Amy, we want to see you back doing what you do best. And I mean singing, not ironing.