Angelina Jolie and Jack Black have already kicked off promotion for Kung Fu Panda 2, which will debut in about a week during the Cannes Film Festival. The animated kids' movie is out later this month on the 26th, and Angelina spoke about the picture's themes, setting a high standard, and how it's hard for her to hear her own voice while recording the part of her character Tigress. Angelina Jolie is in Cambodia for Louis Vuitton currently, and she has her oldest four children with her to celebrate this weekend in case they're still there for Mother's Day. Brad Pitt, meanwhile, is home in LA with their youngest Vivienne and Knox enjoying play time at parks near their home. The six smallest Jolie-Pitts will likely accompany Brad and Angelina on their upcoming trek to France, giving them all a chance to check in on renovations at their home Chateau Miraval. Angelina Jolie said of her kids and new movie: 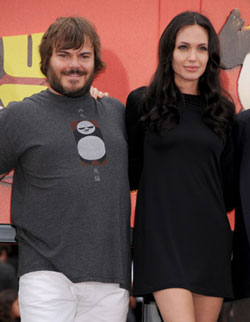