When it comes to star wattage at Comic-Con, it doesn't get much bigger than Angelina Jolie. Although her other half, Brad Pitt, only showed up in cut-out form, Angelina showed up to promote Salt. It was one of my girl Buzz's first panels of the day, and one that she was especially excited about! The minute Angelina took to the stage in a black leather jacket, the flashbulbs went into a frenzy that didn't let up. She answered audience questions (not surprisingly, most of them were from male fans), and costar Liev Schreiber was also in attendance for some comic relief. Read on for Buzz's highlights: 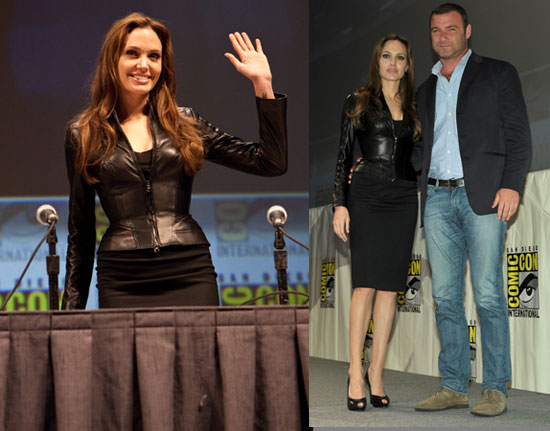 To hear Jolie's story about her worst onset mishap plus lots of photos, just read more.

Be sure to check out all of Buzz's Comic-Con coverage and follow her on Twitter for exciting live updates!