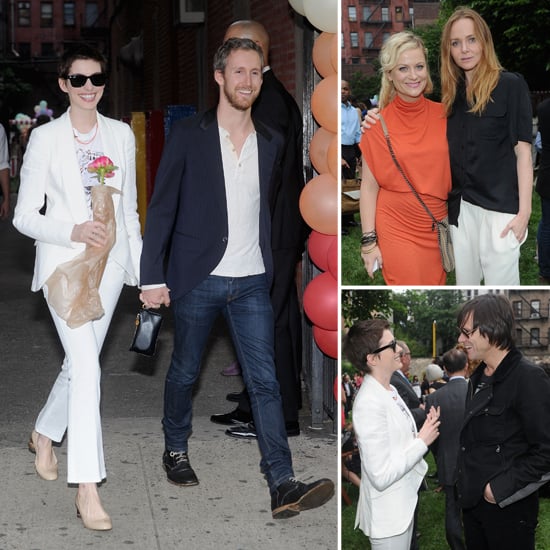 Stella McCartney's annual Spring preview brought out a range of celebrities to the designer's NYC boutique yesterday. Anne Hathaway, sporting the short-haired look she assumed for her role in Les Misérables, said hello to Stella and made the rounds with her fiancé, Adam Shulman. The role of Fantine in Les Mis is the latest in a series of amazing parts for Anne, including her stint as Catwoman in The Dark Knight Rises. If you're an Anne fan, show her some love in the PopSugar 100 before the contest ends this weekend.

Amy Poehler wore bright orange to check out the bash and caught up with fellow actors Jim Carrey and Greta Gerwig. There were plenty of other Stella fans, many of which brought their kids, to see her Resort '13 designs. Lauren Hutton swung by, as did Solange Knowles with her son, Juelz. The backyard was decked out with a lemonade stand, Belvedere drinks for the adults, balloons, and even bubbles.