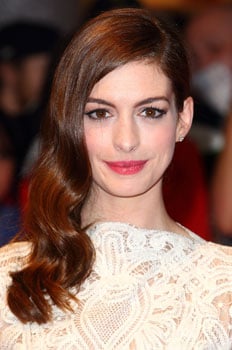 Anne Hathaway crooned "On My Own" as an Oscar host earlier this year, but soon she'll be taking her show tunes to the big screen. Hathaway will star as Fantine in Les Misérables, opposite Hugh Jackman as Jean Valjean and Russell Crowe as Javert. The actress has been rumored to join the project for a few months now, and considering how desperate she is to be on Glee, it's no surprise that she's willing to show off her pipes for film. For those of you who aren't familiar with the story, Fantine is a factory worker-turned- prostitute who gives up her daughter to Valjean before she passes away. Every time another actor is added to this cast, I get a little more excited; Hathaway has the acting chops and theatrical experience to pull off the role, and I can't wait to see her singing side-by-side with Jackman again. How do you feel about this casting news?