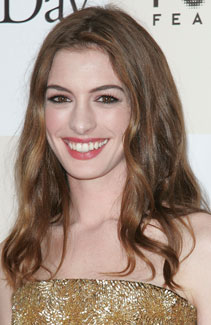 Anne Hathaway doesn't seem to have trouble getting coveted roles these days, but the one she really wants — a guest spot on Glee — hasn't materialized yet. Despite Ryan Murphy confirming in January that the actress would guest star, Hathaway says she hasn't heard from the series creator.

In an interview with PopSugar, she recounted the anecdote of when she ran into Murphy at the Golden Globes. Anne told us that [Murphy said] "'Anne Hathaway, come on Glee!' And I go yes, and he goes 'Fab, I'll call you.'" Sadly, she added, " . . . And I never heard from him again." She hasn't given up the dream, though, and has a message for Glee's mastermind: "Ryan Murphy, I'm calling you out, I want to be on Glee! I got my songs all ready to go!"

Netflix
Sex Education Series Three Is Coming, Here's What We Know
by Navi Ahluwalia 25 minutes ago