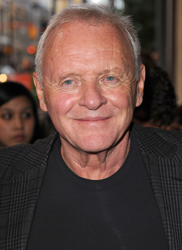 Anthony Hopkins has played some pretty dark characters ("Hello, Clarice . . ."), but for his latest role, he's going to play the man who mastered darkness. Hopkins is in talks to play Alfred Hitchcock in a biopic about the legendary director's life.

The film is an adaptation of the book Alfred Hitchcock and the Making of Psycho, which focuses on the relationship between Hitchcock and his wife while he was developing the iconic thriller Psycho. Sacha Gervasi (director of Anvil! The Story of Anvil) is in negotiations to direct.