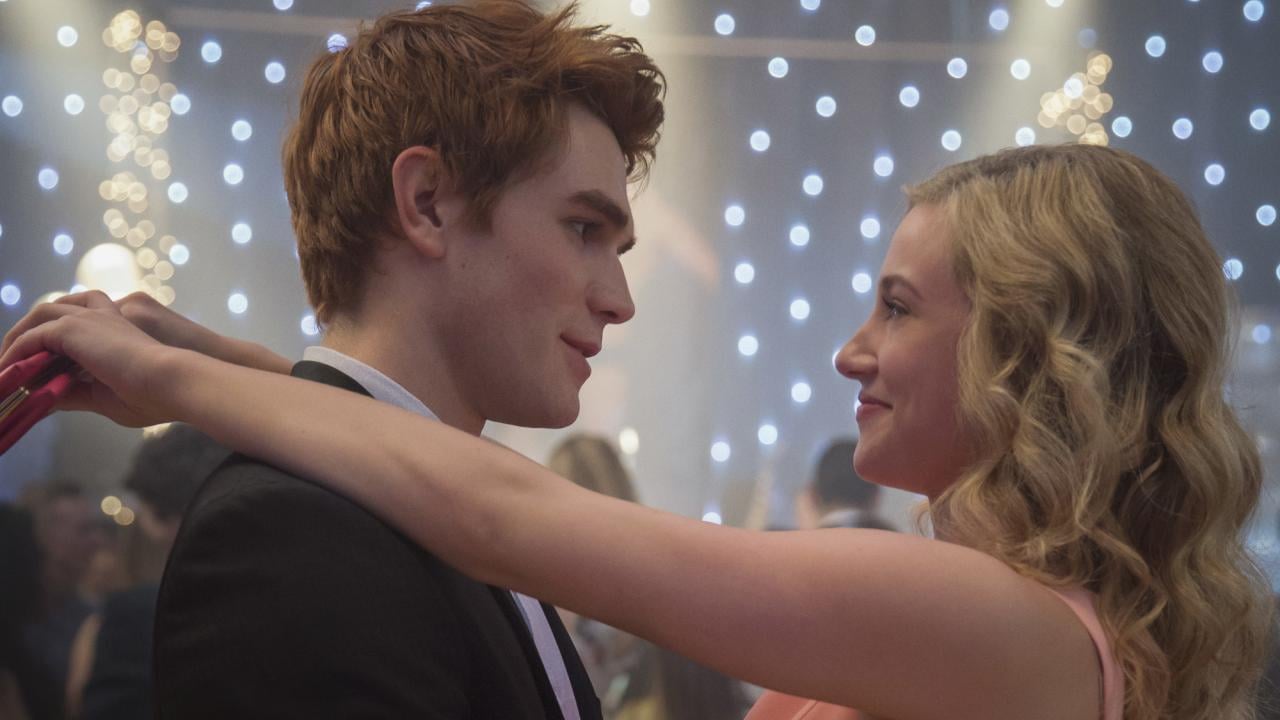 Is Riverdale trying to kill me? That is the sincere, if melodramatic, question I pose for The CW's teen mystery show following its wild midseason finale, "Chapter 22: Silent Night, Deadly Night."

For starters, the identity of the Black Hood is finally revealed, only to be the lame tertiary character of high school janitor Mr. Svenson (which has to be a red herring . . . right?). It's a deeply unsatisfying and nonsensical conclusion to the serial killer storyline, to say the least. But you know what? The big Svenson reveal was eclipsed by another important moment in the episode: Archie and Betty's kiss.

YES! Or no, depending on which couples you're rooting for.

That's right — the two best friends decided to cut the sexual tension brewing between them with their lips following their respective breakups from Jughead and Veronica. For some fans, the moment comes at just the right time. For others, it's an unacceptable and brief bump in the road for the show's meant-to-be couple: Betty and Jughead (I see you and respect you, Bughead shippers).

Regardless of how you feel about Betty and Archie as a prospective couple, they share a Christmas kiss (sans mistletoe, mind you) in a car while on their mission to discover the Black Hood's true identity. The sweet moment comes after Archie gives his lifelong friend the most perfect and sentimental gift at Kevin's Secret Santa party (a Swiss Family Robinson read-along that the pair used to listen to as kids). With Jughead momentarily out of the picture, thanks to his and Betty's ongoing relationship strife due to his involvement with the Southside Serpents, this happens:

See what I mean? Riverdale is trying to KILL me. Fortunately for anyone worried about a romance blossoming between the two, Riverdale stars Lili Reinhart and KJ Apa dished about the moment to Entertainment Tonight, and it definitely seems like it was more platonic than some might realise.

"To me, it shows that there's just such a genuine friendship between them and they just know each other," Reinhart explained. "Even though you don't get to see every little detail of their past or their history, when she says that they listened to it when they were 5 years old, it just paints a picture for you of how long these people have been in one another's lives, and it's just really sweet."

Apa seemed to agree (which makes sense, seeing as it looks like Archie and Veronica patch things up), saying that Bughead shippers "might not be happy" but ultimately shouldn't freak out. "If they're confident Bughead fans, then they've got nothing to worry about."

Riverdale fans, naturally, had plenty to say about the moment on Twitter.

Everyone in the room after Archie gave Betty a perfect Christmas gift 😭#riverdale pic.twitter.com/vAkCw6vN2M

Veronica and Archie reflect what Fred and Hermoine used to be as a couple in HS. Betty and Jughead are Alice and FP Jones? I really want a parents-only episode. Like a flashback episode. Take us back to the 80s👨‍🎤😍#Riverdale pic.twitter.com/3aVhkhihse

That #barchie kiss though. Ronnie and archie may have gotten back together, but this was just the beginning of Betty and Archie's story.

First, Betty and Archie kiss and one would think YES BARCHIE NEXT SEASON but then Veronica kisses Archie and it's like they're back together? Why'd you get my hopes up like that @CW_Riverdale ? #Riverdale #Barchie

veronica is the best character in riverdale and the archie + betty kiss? why? just why? #riverdale

Time out why did Archie and Betty kiss then Veronica and Archie kiss I thought Betty and Archie were going to be a thing... I'm sad now. I thought that ship was going to sail.. guess not I New they would go back together.. barchie!! Plz happen!!!

The Barchie Kiss wasn't the best scene we got tonight and I AM OVERWHELMED 😭 he went in that coffin because Betty's life's in danger I AM!! And then she jumped in to get him out and they pretty much showed us why they are worthy of their newfound screentime #Barchie #Riverdale

archie's "betty" after the kiss sounds exactly like his "betty" after she told him she had a fantasy of them as a couple in the pilot episode pic.twitter.com/dfe4yE763V

The one moment. The one kiss. That changed everything. #Barchie pic.twitter.com/Uj2HIJX3eO

Wait you're telling me Archie is just gonna act like he and Betty didn't kiss? Cheryl saw it though 👀😂

Y'all know when besties cross that line they can never be just friends #Barchie pic.twitter.com/mBQTGdFrlv

THE WAY JUGHEAD AND VERONICA WERE STARING AT #Barchie OMG #Riverdale