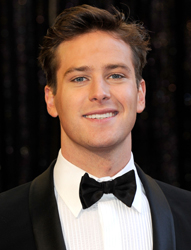 File this one under Perfect Casting: Armie Hammer has been cast as Prince Charming in The Brothers Grimm: Snow White. The actor is best known for playing both Winkelvoss twins in The Social Network, and the tall, blond Hammer seems like a perfect fit for Prince Andrew Alcott in the dark, grown-up version of the fairy tale. Though no one has been cast as Snow White, Saoirse Ronan is reportedly in talks for the role.

Not to be confused with the other Snow White movie in the works with Kristen Stewart attached to star (Snow White and the Huntsman) this film is being directed by Tarsem Singh and also has Julia Roberts set to play the wicked queen.