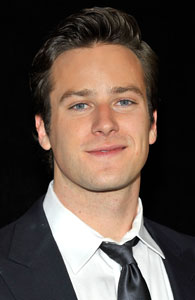 After weeks of speculation (and a Ryan Gosling rumor), Johnny Depp has finally found a sidekick for Tonto: Armie Hammer is set to play the Lone Ranger in the upcoming adaptation of the 1950s TV show. Hammer had his breakout role as the Winklevoss twins in The Social Network and has been lining up a bunch of high-profile roles since then (including The Brothers Grimm: Snow White and J. Edgar). As for Depp, The Lone Ranger is a bit of a pet project for the actor, who has been attached to the film for almost three years. Now that it's coming together (with Gore Verbinski directing), how do you feel about Hammer as the masked Texas Ranger?