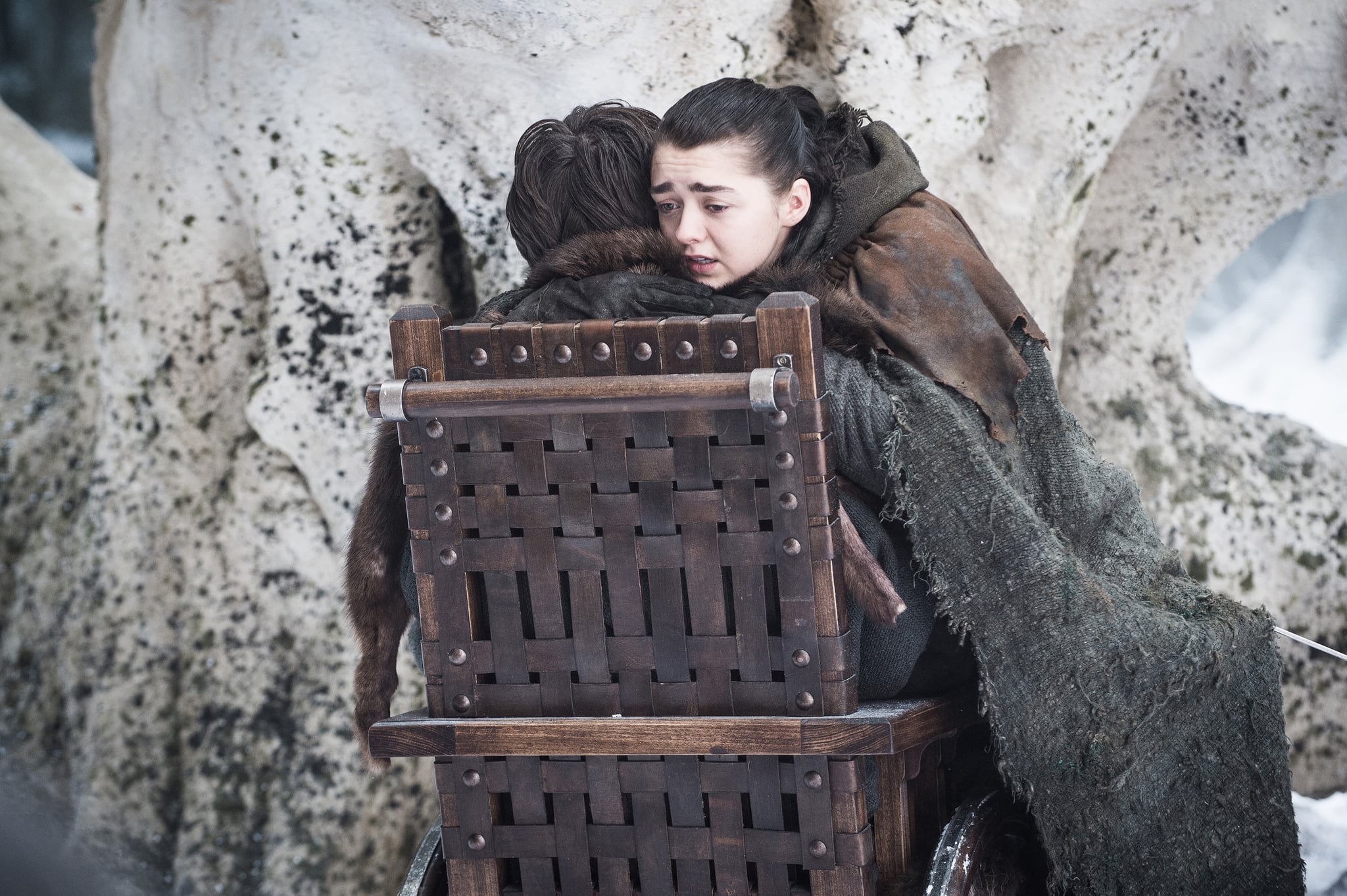 Over the course of a just a handful of season seven episodes, Bran Stark has officially become Westeros's biggest weirdo. OK, OK — being omniscient (or something close to it) probably takes a toll on the psyche, but what's the deal, man? Well, if the theory Redditor riffy61 recently posited ends up coming true, then Bran has way more than the Night's King and Westeros's impending doom on his mind; he's dealing with the potential death of one of his sisters.

Let's back up: in the season's fourth episode, "The Spoils of War," Arya makes her grand return to Winterfell and has a happy reunion with both of her siblings, Bran and Sansa. When she hugs Bran out by the Weirwood tree, their embrace is still a little cold thanks to Bran's new, stilted demeanor, but it's markedly more human than the hug he and Sansa share in the previous episode. When Sansa hugs him, Bran sits completely still, staring into space; when Arya hugs him, he puts a protective hand on her back while staring over her shoulder directly at Sansa. It's after this staredown that Bran gifts Arya with the Valyrian steel dagger that Littlefinger hands over earlier that day.

While many people believe Bran's choice to give Arya the dagger means that she's going to have to fight a White Walker at some point soon — since Bran can probably see the future and Valyrian steel is one of the few things that can kill the sentient popsicles, it stands to reason he'd want to appropriately arm his sibling for what's to come — riffy61's Reddit theory suggests the threat to Arya is actually much closer than we all think ("The call is coming from inside the castle," if you will):

"When Bran reunites with Sansa at Winterfell (S7 EP3) he very clearly does not embrace her back when she is hugging him (we see a view that shows his hands remain by his side). In fact, while Sansa hugs him he stares blankly beyond her (which yes, I recognise is kind of his thing to do now). However, when he reunites (S7 EP4) with Arya he does hug her back (a view is shown with his arm around her), and while his face is still blank-ish, there definitely appears to be a hint of concern as he stares over Arya's shoulder at Sansa (who looks down). Bran knows that something is not right with Sansa and that she will likely do something that hurts her family. He made a point of arming Arya with that dagger, which he can see she will have to use for some reason not yet known to us. Will she have to kill Sansa?? Only Bran knows for now."

Sansa has only just reunited with her long-lost siblings — will she really double-cross one of them to the point where Arya thinks she has to kill her? As crazy as the thought might seem, the season's fifth episode definitely has a few key scenes that would support this theory.

First of all, there's the moment in Ned and Catelyn's former bedroom at Winterfell where Arya confronts what she believes to be Sansa's shady politics (some Northern lords talk sh*t about Jon Snow behind his back to Sansa earlier in the episode, and she doesn't defend him). Sansa coolly brushes her little sister's complaints to the side, telling her that they need to "work together" rather than "cutting off heads" (which . . . fair). Second of all, there are the seeds of discontent Littlefinger plants in Arya's head by leading her to a letter Sansa wrote to Robb under duress in a previous season. Will that turn the tides on how Arya feels about her big sister and lead to drastic action?

Sadly, it looks like Bran isn't going to just come out and say which scenario he's seen (damn you, Three-Eyed Raven), so, as always, we'll just have to wait and see. Unless, of course, you're on board with that whole Game of Thrones leak . . .