I'll be updating the winners of all the 2009 NME Awards in this post, so keep your eyes peeled and see if your favourite nominee took home the trophy you wanted them to! Muse beat out Radiohead, Oasis, The Killers and Kings Of Leon to the trophy for Best Live Act, as voted for by NME readers. Oasis have won the Best British Band gong, while Pete Doherty has picked up the Best Solo Act award! Are you pleased with the winners so far? Let me know if you think the winners deserve their awards (or not) in the comments. 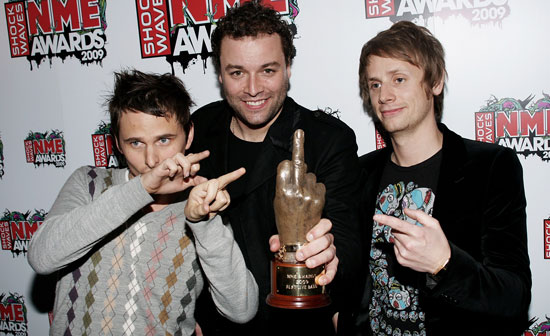 MGMT took two awards for Best New Band and Best Song, while the Jonas Brothers were also double winners — taking Worst Band and Worst Album. President Barack Obama was awarded the Hero of the Year award, while George W. Bush was voted the Villian of the Year, for the sixth time in a row! Alexa Chung beat out Alex Turner to win best dressed, and that crazy The Mighty Boosh gang won Best TV Show — check out pictures of some of the winners in the gallery!

To find out more of the winners and see more photos, just read more.