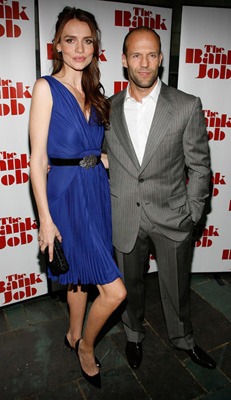 The Bank Job has taken the number one spot at the UK box office, beating Will Ferrell's Semi Pro which came in at number two.

The heist movie, about a hushed up bank robbery in London in the 1970s, stars Jason Statham and Saffron Burrows, who were living it up in New York at the beginning of the week at a screening of their film at Bryant Park Hotel.

The film is based on a genuine Baker Street robbery which took place in September 1971 and was kept out of the public eye thanks to a government cover up which prevented the British press from referring to it.

Although the film is based on drastically different circumstances, the subject of a news ban puts me in mind of that revelation last week regarding a certain young Prince and a news blackout put in place by the government ...